Jussie Smollett charges include 6 counts of disorderly conduct for lying to CPD; sentencing date not yet set
WLS
By Diane Pathieu 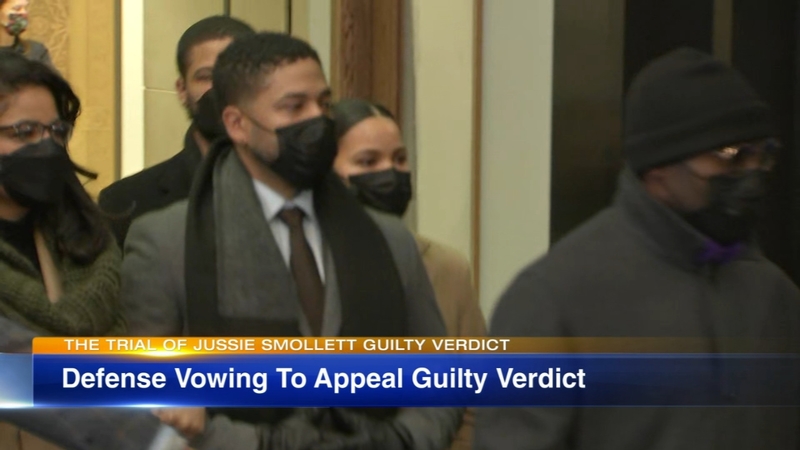 CHICAGO (WLS) -- After Jussie Smollett was found guilty of lying to police about a staged attack on himself, his defense is planning their next move as the former "Empire" actor could be sentenced to prison.

The defense is vowing to appeal the verdict that found Smollett did in fact lie to Chicago police when he said he was the victim of a racist and homophobic attack.

Smollett raced out of the courthouse Thursday night ignoring questions from reporters after the jury returned guilty verdicts on five of six counts of felony disorderly conduct, determining the former "Empire" star lied to police,

RELATED: Here's what could happen during Jussie Smollett's sentencing

"Not only did Mr. Smollett lie to the police and wreak havoc here in this city for weeks on end for no reason whatsoever, but then he compounded the problem by lying under oath to a jury," said Special Prosecutor Dan Webb.

The prosecution contended Smollett recruited the Osundairo brothers for a staged hate crime in Streeterville in January 2019 because he was upset, that his studio didn't take seriously, a threatening letter he'd reported.

Through surveillance video and a rideshare record police were able to identify the Osundairos as the men who left Smollett bruised and battered with a noose around his neck and doused with bleach.

Special prosecutor Dan Webb ripped into actor Jussie Smollett after he was found guilty of lying to police about a racist, homophobic attack.

The siblings said it was all a hoax devised by Smollett for media attention, but the actor testified the attack was real and that the Osundairos were lying.

Ola Osundairo had no comment on the verdict but took a swipe at reporters who had referred to the Chicago-born brothers as being Nigerian.

Jussie Smollett's defense attorney Nenye Uche said his client is "100% innocent" and is confident they will overturn his conviction on appeal.

"I apologize if I'm not using my Nigerian accent tonight," Ola Osundairo said.

The defense has vowed to appeal.

The Chicago Police Department did not have a comment on the verdict, but former CPD Supt. Eddie Johnson, who was superintendent when the hoax attack happened, was somewhat rueful after the news broke.

The case struck him as odd from the start.

"Let's face it. You look at that video of hat noose. I will say this, there's no Black man in America that would have a noose put around their neck and leave it on," Johnson said. "They just won't do that. That first thing they're going to do is take it off."

Eddie Johnson was Chicago police superintendent when Jussie Smollett reported a racist, homophobic attack against him, and said he knew something was wrong almost immediately.

Judge James Linn said he was fine with keeping Smollett on his recognizance bond, but he will have to return to Chicago for sentencing.

No sentencing date has been set. Smollett faces between one and three years in prison, but since he has no criminal record, experts say it is possible he will just get probation.

The city's Law Department released a statement after the verdicts were read, saying, "The City filed a civil lawsuit against Jussie Smollett to recover costs incurred by the Chicago Police Department investigating what the City believed to be Smollett's false police reports that he was a victim of a hate crime. While using a different standard of proof, the jury's finding of guilt convicting Jussie Smollett of criminal charges stemming from the incident confirms that the City was correct in bringing its civil lawsuit. The City intends to continue to pursue its lawsuit to hold Smollett accountable for his unlawful actions and to demand that he compensate the City for costs incurred by the Chicago Police Department which took his false claims of harm seriously."