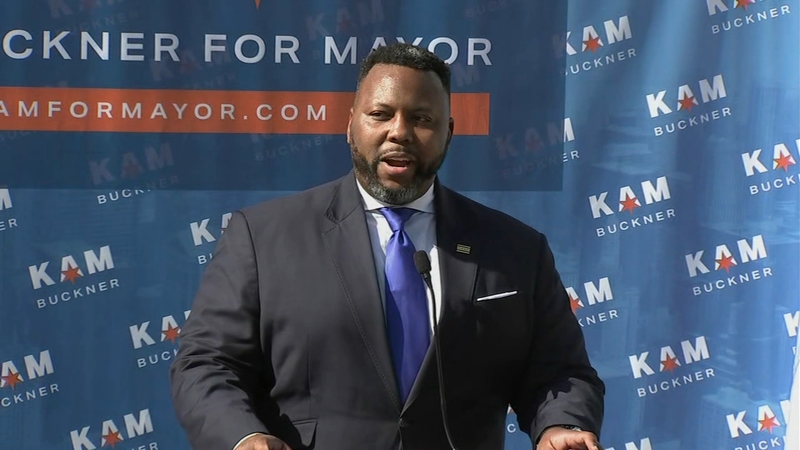 CHICAGO (WLS) -- Democratic State Rep. Kam Buckner is jumping into Chicago's mayor's race. He made it official Thursday, though the announcement had been anticipated for more than two months.

"My name is Kam Buckner, and I'm announcing my candidacy to be the next Mayor of Chicago," Buckner said at a gathering with supporters in the South Loop.

Earlier, Buckner sat down to talk one-on-one about why he's getting in the race.

"The more I talk to people in my community and around the city, the more obvious that was to me that folks don't feel safe," Buckner said. "They don't feel like there's a plan for their safety."

Buckner said safety is a top concern for him and the entire city. His plan would include investing more in prevention programs.

"We've got to treat this pandemic of violence the same way we treated the pandemic of COVID," Buckner said. "It means to do whatever is necessary to get it eradicated."

When asked if he is saying that Mayor Lori Lightfoot has failed the city, Buckner replied: "What I'm saying is that if I thought that the city was moving in the right direction, I wouldn't be sitting here talking today as a candidate for mayor."

"Being Mayor of Chicago requires the sort of toughness that Kam Buckner hasn't shown in his public life. When others stood up to Madigan and told him it was time to go, Buckner voted to keep him in power. You can't take on the machine when you're part of it," Lightfoot campaign spokesperson Christina Freundlich said in an emailed statement.

Lightfoot's team is also expected to make an issue of Buckner's two DUI arrests, to which he pleaded guilty. In both, police said he was found passed out behind the wheel.

"I'm a state rep," he can be heard telling the officer in Springfield.

One from 2019 was captured on police body cam video obtained by The Center Square. The other was from 2010. The police report shows his blood alcohol level was reported as 0.18.

"I've made mistakes. I've made missteps," Buckner said. "And I've been very open and honest and transparent about those. And I've held myself accountable."

Since then, he said he has become a better person, including becoming the Chair of the Legislative Black Caucus.

Buckner said he is lining up financial support and working on getting the backing of the business community, which has reportedly been looking for a replacement for Lightfoot. The mayor said she will be making her reelection announcement soon.