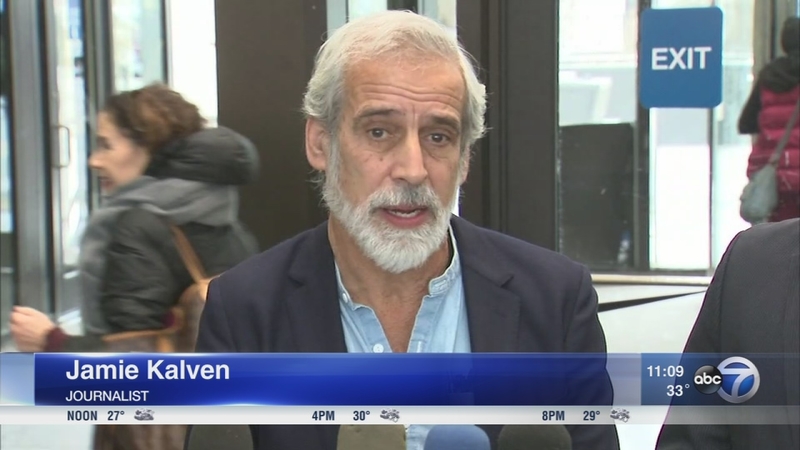 CHICAGO (WLS) -- A Cook County judge ruled Wednesday that journalist Jamie Kalven does not have to reveal his sources in the trial of ex-Chicago cop Jason Van Dyke, who is accused of killing 17-year-old Laquan McDonald in 2014.

Lawyers for Van Dyke, who faces first-degree murder charges, had asked the judge to force Kalven to take the stand in the trial, alleging the reporter obtained leaked documents and used those documents to "shape" his interviews with witnesses. Earlier this month, Kalven's attorneys argued that the source gave a statement to law enforcement before he was interviewed.

In a Slate article published about four months after the shooting, Kalven countered the CPD's narrative about how the McDonald died, citing autopsy results. Another journalist then requested the police dashcam video, which shows the black teen being shot 16 times.

Van Dyke's lawyers also allege that he had sources inside the Independent Police Review Authority and assistance from the FBI. Kalven's lawyers argued that there is no concrete evidence of that.

Judge Vincent Gaughan quashed the defense's subpoena, saying that he did not adequately show that Kalven's testimony was necessary to their case.

The ruling signaled a victory for journalists who believe that protecting sources allows for them to do good journalism. Illinois law protects journalists' privilege, except under extreme circumstances.

"Whistleblower sources who come forward when police act improperly are crucial to democracy and we are very happy that the judge affirmed those principles today," said Kalven's attorney, Matthew Topic.

"As relieved as we are today, this process should never have gone forward at all and I think it's important to think about, in this national climate for the press, how important it is to just cut this thing off at the onset," Kalven said.