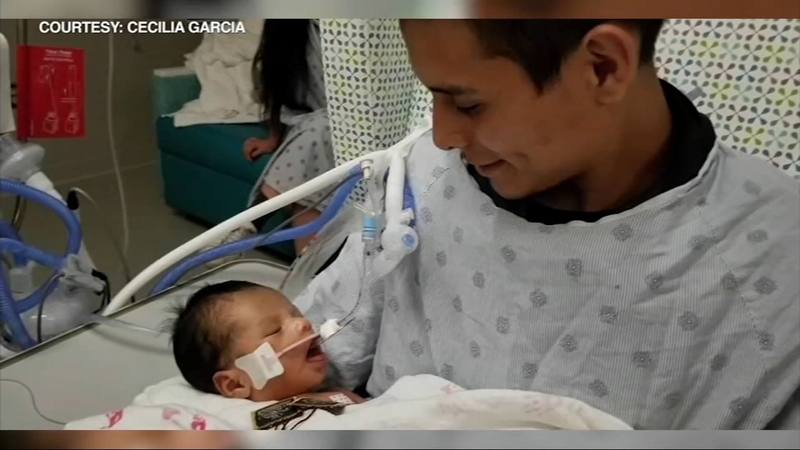 The 19-year-old was lured to a home on the Southwest Side, where police said she was killed and had her baby taken from her womb on April 23. The baby, Yovanny, had been hospitalized in intensive care before dying early Friday morning.

In a statement, the spokesperson said, "It is with great sadness that we inform you of the passing of baby Yovanny Jadiel Lopez. He passed away this morning Friday June 14, 2019 from his severe brain injury...Please keep his family in your thoughts & prayers as they go through this difficult time."

Yovanny was surrounded by his father Yovanni, other family members and clergy.

"Yovanni Lopez, the father, is in a great deal of mourning," said Frank Avila, attorney representing the family.

Avila addressed media regarding the infant's death outside of Christ Medical Center.

"The baby did not just die, the baby was murdered and we demand justice. The baby did die of natural causes, of course, but natural causes that were inflicted by the brain injured cause from the asphyxiation of his mother. That was a murder and murder charges should be brought," Avila said.

The family is also calling for changes with the Chicago Police Department due to how they say the case was handled when Ochoa-Lopez was reported missing.

"What we need to do now, in terms of action for justice, is to hold the police accountable for their neglect of this family while this was occurring," said Sara Walker, student pastor who has been assisting the family.

Attorney for Marlen Ochoa-Lopez request GoFundMe revenue released for family to pay hospital bills and funeral expenses for both Marlen and her newborn son.

Avila also addressed concerns regarding the GoFundMe account created to help the family with medical and funeral expenses. He said Facebook and GoFundMe have frozen the accounts at this time and the family is asking for the companies to release the fund.

The family has not been able to pay for Ochoa-Lopez funeral and are concerned about moving forward with Yovanny's services.

Avila said the family intends to bury Yovanny with his mother in a private service.

Three people have been charged in Marlen Ochoa Lopez's death. Prosecutors said Clarisa Figueroa lured 19-year-old Marlen Ochoa-Lopez to her home with the promise of free baby clothes, then allegedly killed the young woman with the help of her daughter Desiree.

Police said Clarisa Figueroa showed up to the hospital with the infant after she killed Ochoa-Lopez and removed the child from the womb.

According to the Department of Children and Family Services, the hospital contacted the agency on May 9, more than two weeks after Figueroa first checked into the hospital.

Three weeks after Marlen's disappearance, police said her remains were found in the Southwest Side home where police said she was murdered.

Clarisa Figueroa and Desiree Figueroa have been charged with first-degree murder. Clarisa's boyfriend, Piotr Bobak, has been charged with concealing a homicide. Avila is requesting no protective custody for the three involved in Ochoa-Lopez and her baby's death.

Our hearts and prayers continue to be with the Ochoa-Lopez family, whose courage and grace have drawn the admiration of our entire organization. We thank the Illinois Department of Public Health for its thorough review, and CMS for its assessment, which showed the medical care provided and actions taken by our staff were appropriate. Nevertheless, we are committed to learning from the experience to improve processes. Additionally, we would like to extend our deepest gratitude to our dedicated team for their tireless commitment to delivering world-class, compassionate care.