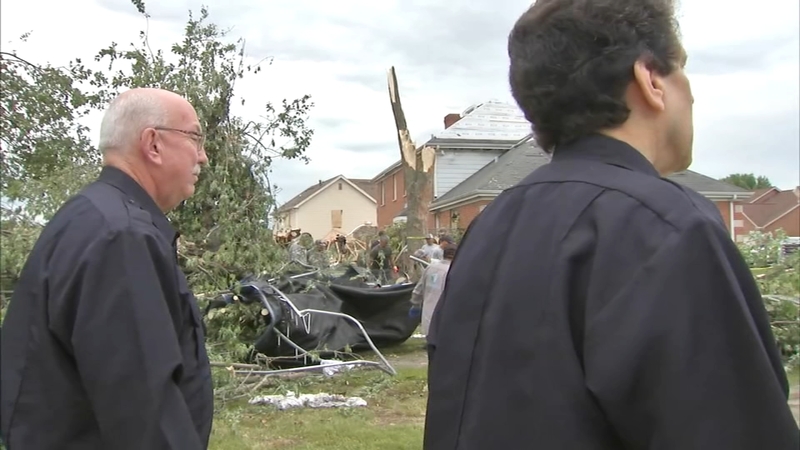 NAPERVILLE, Ill. (WLS) -- More than a dozen homes are now deemed uninhabitable in Naperville due to tornado damage. As residents in DuPage County deal with the devastation, a group of volunteers is now keeping watch over damaged properties at night.

Red X's are painted across one Naperville neighborhood, where 19 homes have been deemed uninhabitable. The families who lived here are being forced to move out. One of the last to do so packed up Wednesday with the help of friends and co-workers.

"It's hard enough to have to move, period, and to have to do it in kind of a fashion, I can only imagine what they're going through," said Derek Krauss, who was helping a co-worker move.

According to Naperville's most updated damage assessment, 146 homes sustained major damage here as a result of Sunday night's tornado, in addition to those condemned. As many have left while repairs take place, it's become imperative to have additional patrols overnight.

"It's important and it's essential, I think, to give people piece of mind that things are well protected," said Bob Young.

Young and Joe Labut are both volunteer members of Naperville's Community Radio Watch. Trained by the police department, they work in conjunction with them and will begin walking the neighborhood at 9 p.m. Wednesday to make sure no one is there who shouldn't be.

"We function as an extra set of eyes and ears," Labut said. "We're trained what to watch for. And if the is anything suspicious we call the Naperville Police Department and they handle the situation."

Looting concerns have been especially high as the process of securing the damaged homes has taken place. As auxliliaries for the police department, the members of the CRW take their task seriously. And the residents here clearly appreciate it. Labut has been a volunteer with them since 1996.

"This goes the extra step, for me, personally," Labut said. "So the individuals that own the homes here, they are worried about it. We'll be out here all night helping to make sure their property is safe."