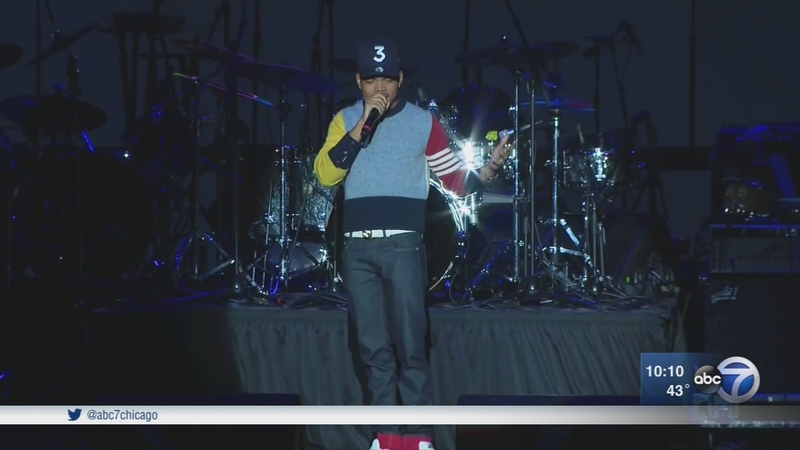 CHICAGO (WLS) -- Former First Lady Michelle Obama and Chicago's own Chance the Rapper were among the headliners Wednesday on the second and final day of the Obama Foundation Summit.

About 500 participants from 60 countries attended the two-day event, which aims to inspire a new generation of leaders, in Chicago's South Loop.

The summit concluded with a star-studded concert headlined by Chance the Rapper, and featuring performances from Gloria Estefan, the National, Nas and others. Along with summit attendees, thousands of young people from various Chicago neighborhoods were invited to be part of the concert.
Earlier, President Obama formally closed the summit by thanking those who attended.

"You are right there, ready, and able to transform the world," he told them.

Chicago rapper Common and "Hamilton's" Lin-Manuel Miranda spoke of the bridge between art and activism.

"Once I realized that music does affect lives, and that art affects lives, and our voices mean something, that was when I was like, okay, this is a part of activism," Common said.

"Our voices can affect change. If you don't have a dollar to spend, you can get your voice heard and make an enormous difference because, frankly, that's what we have!" said Miranda.

Michelle Obama was Wednesday afternoon's featured speaker. In a conversation with poet Elizabeth Alexander, she discussed a wide array of topiss topics such as politics, community engagement, growing up on the South Side, work-life balance and raising children.

The former First lady spoke about the inspiration of her Chicago relatives and the self-confidence she was given. She urged women in the crowd to find their voices and use them.

"If we don't teach our young girls to speak at an early age, that doesn't just happen. It takes practice to have a voice. You have to use it again, and again, and again before you can say 'no,' or 'stop,' or 'don't touch me,'" she said.

And without getting political, she suggested attendees take care on Twitter.

"This whole tell-it-like-it-is business, that's nonsense. You don't just say what's on your mind. You don't tweet every thought," she said.

Some local community organizers said the summit's speakers, sessions and connections will have a lasting impact on their work.

"Getting the opportunity to speak to people who have really climbed the mountains you're looking to climb, so it's been very empowering," said Sheldon Smith, the Dovetail Project.

"I am still in the process of learning my voice, but I do think I'm learning from the right people here today," said Shantenae Robinson, community outreach organizer.

David Plouffe, President Obama's former campaign manager, was at the summit as well. He is now focusing his work on social advocacy and sees the need to prepare a new generation of leaders with events like the summit.

"There's a lot of challenges here and around the world, but you've got people here digging in, figuring out, how do I organize and motivate people to bring about change," Plouffe said.