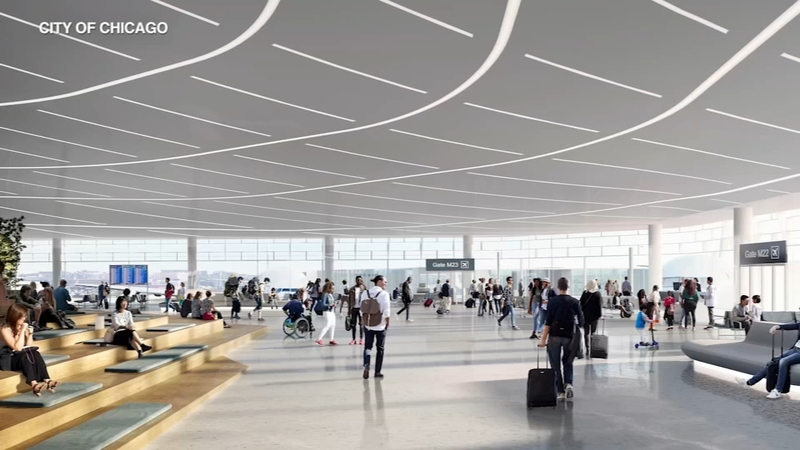 The new international terminal will include 10 new gates and feature improvements to passenger amenities, TSA checkpoints and customs screenings.

"In every neighborhood in the city of Chicago there is somebody that works at the airport here at O'Hare," Chicago Mayor Rahm Emanuel said in prepared remarks. "And that's why it is an economic engine for the entire city, the entire region and the entire Great Lakes area."

Despite the weather, the air was festive under a tent on the east side of the airfield as the mayor, airline employees from various unions and their corporate heads talked about the project's 3,500 jobs.

United Airlines CEO Oscar Munoz donned a flight captain's hat at the podium and proclaimed: "This whole project came together because of the fact everyone understood... the value of an airport in this world. It is a competitive space beyond all others."

He was followed by American Airlines vice president Francesco Tedeschi.

"We are able to make Chicago a welcoming experience for those visiting those here on business as we do that as an airline we are always reminded we have no right to be here," he said.

At 700,000 square feet, the new terminal will build on the existing structure's 400,000 square feet and take up much of the space between it and the tent in which Wednesday's ceremony was held. The job is to modernize a functional place that is typically overseas visitors' first touch of Chicago. It's a space that, while workable, has lost its sheen of modernity.

The upgrade to Terminal 5 comprises a major chunk of the $8.5 billion cost of O'Hare 21, the mayor's overall vision for what this crossroads of domestic and international travelers ought to aspire to. On the tarmac as he was leaving, Emanuel was asked if indeed this is his legacy as he prepares to leave office after a new mayor is elected next month.

"It is not my legacy. It is the city's legacy," he said. "And more important than the legacy is the other way to look at it. Don't look at it through the rear view mirror, look to the future. And if you look at O'Hare and what we are building with O'Hare 21, every other city is now looking at O'Hare as the model you want to replicate."