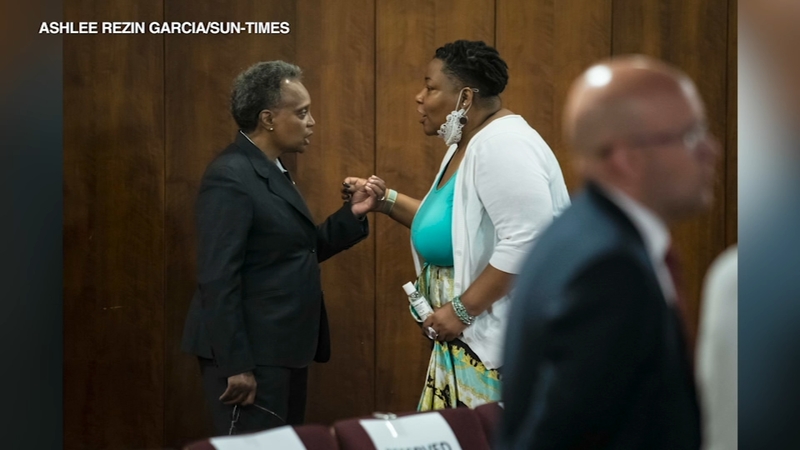 CHICAGO (WLS) -- Wednesday's Chicago City Council meeting devolved into arguments and chaos after an argument over confirming the next corporation counsel.

Mayor Lori Lightfoot's allies called for a vote on Celia Meza to be the next corporation counsel, only to have two aldermen quickly motion to delay the vote in a procedural move. It all went downhill from there.

"When do we stop playing the game and mistreating people in our community?" asked 20th Ward Alderman Jeanette Taylor. "This ain't about that, so I second Alderman Lopez."

Angered by the Law Department's move to dismiss the lawsuit filed by Anjenette Young after the wrongful CPD raid on her home, Taylor joined 15th Ward Alderman Ray Lopez, effectively blocking a motion to approve Meza, who was seated next to the mayor.

In a highly unusual move, Mayor Lightfoot then left the dais to confront Ald. Taylor face-to-face. The two exchanged words and pointed fingers. Taylor wasn't having any of it, and didn't back down.

She explained after the council adjourned what the exchange was about.

"Just was basically, I cut out a Latinx woman, I cut out a woman of color, D-and-P-ing this. No I didn't. This is a lesson to teach you a lesson, you have to work with us," Taylor said.

D-and-P is short for "defer and publish," a procedural move to delay council action on a matter.

"I saw the whole thing and I couldn't believe it, and I want to know who would allow and why they would allow her to go back there," said 37th Ward Alderman Emma Mitts. She called the situation embarrassing.

The mayor's floor leader Michelle Harris motioned to adjourn the meeting a short time later. It was quickly appealed, leading to more confusion and frustration.

Our residents expect the City Council to pass critical legislation that impacts their daily lives. However, today, a small group of Aldermen brazenly created a spectacle and did a disservice to their constituents, instead of raising their concerns through the appropriate forum. As a result of their cynical actions, the City Council failed to pass protections and relief for our hotel workers, primarily Black and brown women, who were most impacted by the pandemic, and our small businesses. On Friday, we look forward to continuing our work on behalf of Chicagoans.