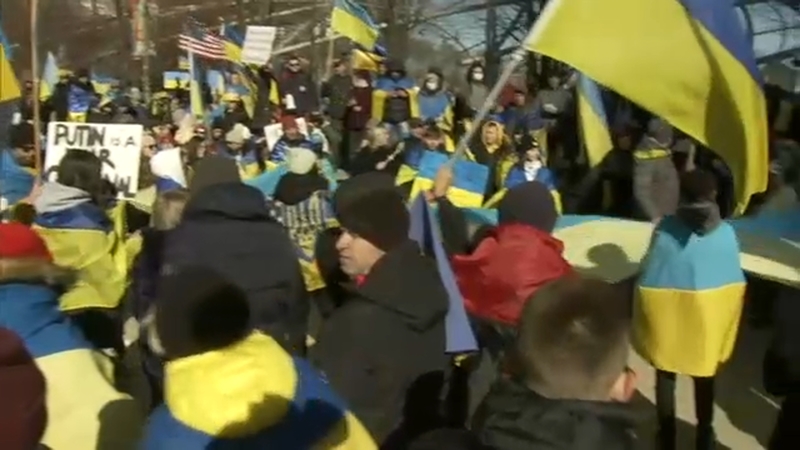 CHICAGO (WLS) -- From the Hollywood Strip to Chicago's Mag Mile, blue and yellow were the prominent colors, with politics coming to center stage on the entertainment stage.

Big-name entertainers popped flashes of the Eastern European flag of blue and yellow, including Ukrainian-born actress Mila Kunis who shared her pride for the strength of her motherland.

"When you witness the strength and dignity of those facing such devastation, it's impossible to not be moved by their resilience," Kunis said.

The academy paused the night's festivities with a moment of silence.

At a Chicago watch party at the city's Actor Studio, dozen also stopped to reflect.

Hours earlier, hundred joined together downtown, once again, as many with family members still in Ukraine or friends continue to desperately seek safety.

"We understand the pain they're going through and I really, truly cannot, you know, put into words how grateful I am for the support," said one woman.

"Two generations of my family are from Ukraine," said another woman. "So in this moment, I feel very sad because I see the grief through my family, after watching a home, that they've known for generations -- be so violently terrorized."

The rally started at Water Tower, where U.S. Senator Dick Durbin spoke Sunday in support of protesters outraged over the "unprovoked Russian military invasion of Ukraine."

RELATED: Zelenskyy: West needs more courage in helping Ukraine fight
"I'm especially honored by the Ukrainian-American population here in Chicago, one of the largest in the United States. The solidarity you have shown from start to finish is amazing -- it inspires me -- all who are gathered here today," Durbin said. "Let us make certain that this isn't the end of our commitment but the beginning."

"My grandparents came from Ukraine," said Congresswoman Jan Schakowsky. "They lived there and finally came to the United States early in the last century. My grandfather was a peddler. He sold vegetables through the alleys in his horse and wagon in the city of Chicago -- a hard worker, and I am proud of my Ukrainian heritage."

Watch the complete speech given by President Biden in Poland, wrapping up his trip to Europe amid the war in Ukraine.

The president called the war a "strategic failure" for Russia.

RELATED: Minnesotan detained for 10 days by Russian forces in Ukraine has been released