Valparaiso family takes in family of 8 Ukrainian refugees, including one battling cancer

"They didn't want to be separated, so we weren't going to do that."
WLS
By Sarah Schulte 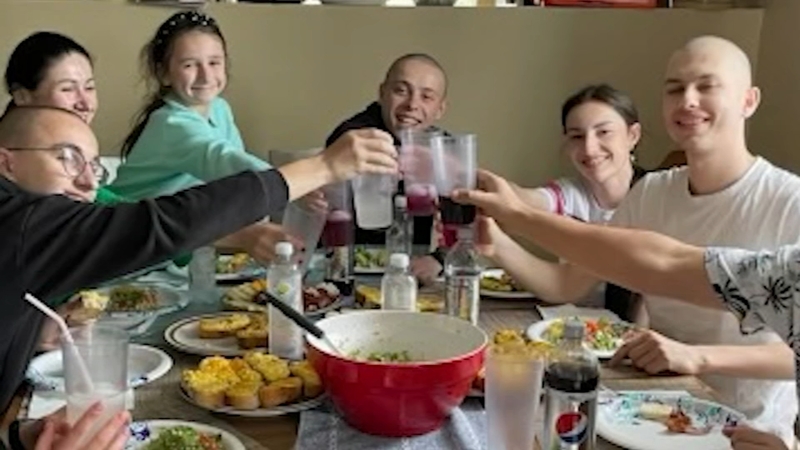 VALPARAISO, Ind. (WLS) -- A northwest Indiana family has opened their home to a refugee family of eight from Ukraine, including one of who is battling cancer.

From war-torn Ukraine to a family-friendly soccer game in a Valparaiso subdivision, it has been a long and hard 100 days for the Didek family.

"Every time we remember how it was, we always cry," Mykhalo Didek said.

Mykhalo Didek was already in the United States studying English when Russia invaded Ukraine. He immediately told his wife, who worked as judge in the Ukrainian city of Polonne, to drive the family to Poland as soon as possible.

"While we were driving, I was worried and had an accident - my car crashed," Didek said.

The car accident was followed by brutal days trying to catch a train to the border. Then, from Poland to the Mexican border where Mariaa Didek, her four children and two future son-in-laws waited for weeks to get to the Chicago area to meet up with Mykylo.

"They didn't want to be separated, so we weren't going to do that," Carter said.

Carter found schools for the younger children and free medical treatment for future son-in-law Mykyta Maslov, who was diagnosed with cancer just days before the war began.

"I try at all time to be positive because I focused on my treatment," Maslov said.

Maslov said he was more worried about his own mother, who lived in a building that was bombed. While all would like to return to Ukraine, they realize the future is unknown.

For now, home is Valparaiso with the Carter family.