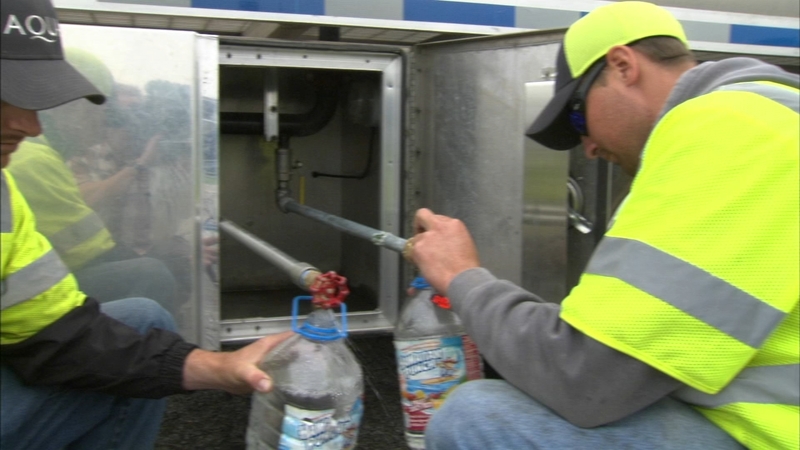 UNIVERSITY PARK, Ill. (WLS) -- Residents in the south suburbs are frustrated over what they consider a lack of information about efforts to clean up lead-tainted water.

The head of Aqua Illinois met with regulators in Springfield Thursday about the issue.

In University Park, Helene Collins still needs bottled water, for the sixth day in a row.

"Now it's been going on for almost a week, and there are still no answers. So at this point, yeah, people are concerned," she said.

Ingram, like so many of her neighbors, is infuriated and frustrated.

Last Friday, Aqua Illinois instructed customers in University Park, Monee and Green Garden not to consume water because of high lead levels. While the company has lifted the order in some locations, other communities, like several homes in University Park, have not been cleared.

Initially provided with bottled water, Ingram said they've been told now to come to the town center to fill up jugs to take away.

"I am not drinking water from that big truck," said University Park resident Sarah Boyd. "I don't know what's in it. I can't trust them now. They failed me."

Thursday, at the request of village officials, Aqua Illinois opened an information center, but residents are still frustrated.

"There are no answers to the questions that we have. It's the same answers - call the 1-877 number - they are not giving us any answers," said resident Davida Colquitt.

At the information center, a company spokeswoman said they are trying to answer questions. She said they're having residents sign up for alerts, get special filters and testing kits. And crews were also on the streets handing out filters door-to-door.

In a message to the community, Aqua Illinois President Craig Blanchette said their goal is to keep the community "informed and safe." He wrote the treatment facility and water mains do not have lead, but the new way water is treated released lead in "internal plumbing of older properties."

"They have been very good at getting water out to the community, but that can only go on for so long," said University Park Mayor Joseph E. Roudez III. "The residents want to know when it happened, how long has been going on? What do they plan on doing about it?"

The mayor said there will be a community meeting in University Park Saturday at 10 a.m. A company spokeswoman confirmed Blanchette will attend the meeting.