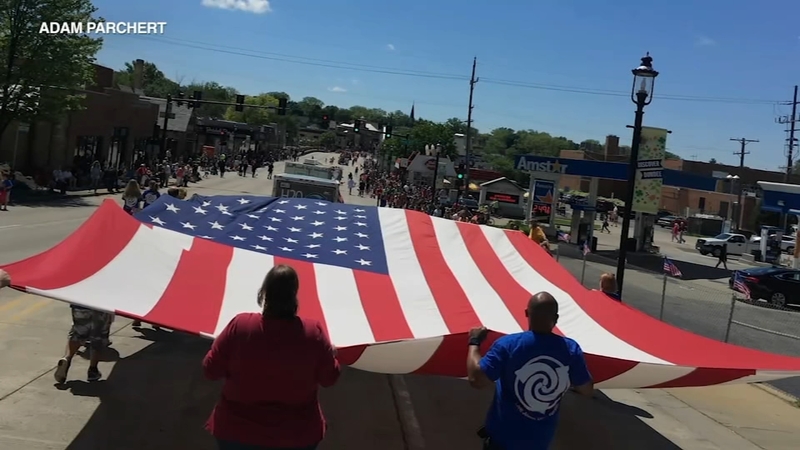 CHICAGO (WLS) -- Illinois Route 72 is a busy road carrying about 27,000 vehicles a day. It goes right through the heart of downtown West Dundee before crossing the Fox River and continuing to East Dundee.

For many years this has served as the Memorial Day parade route, which has stepped off annually since the end of World War II. But not this year.

"Disappointed, but we felt it was important to have it done right," parade director Adam Parchert said.

West Dundee officials decided to change parade routes in town in the aftermath of last year's parade tragedy in Waukesha, Wisconsin. Daniel Brooks allegedly drove onto the parade route, running over people in the crowd.

"That incident six people lost their lives and 62 others were injured," West Dundee Police Chief Tony Gorski said. "That was what our decisions were based upon. Public safety."

So, West Dundee officials decided to move the parade route to residential streets where they can better control traffic.

VFW Post 2298 hosts the parade to honor America's war heroes who sacrificed everything. They determined it would be too difficult to change their plans on short notice.

"This is something we don't want to put together real quick and just make a showing," VFW Post 2298 Commander Eric Piwowar said. "This is very important to us and we want to make sure it stays important."

The parade is normally a nice benefit to businesses, like Around The Corner candy shop. It's one of a number of businesses that would benefit from the parade crowd.

"They love the restaurants, the bars, the candy shop," said Bill Apostol, of Around The Corner candy shop. "It's a great community."