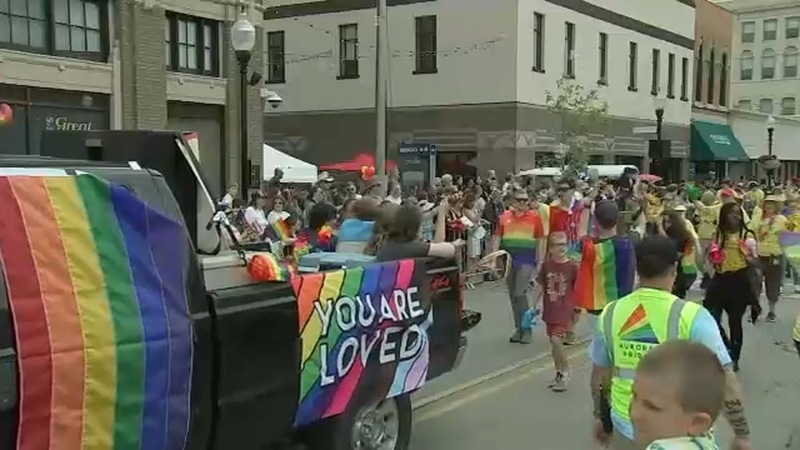 AURORA, Ill. (WLS) -- Despite the parade being in limbo last week, the 2022 Aurora Pride Parade went on through the streets with hundreds of people out celebrating.

It's a day in Aurora where colors truly shine bright.

But, Vizcarra's first Pride almost didn't happen after parade organizers decided last month to not allow officers to march in the parade wearing uniforms or riding in police cars.

Mayor Richard Irvin and the city then revoked the parade's permit, claiming there weren't enough officers to patrol the event.

"I think it's a little hypocritical of the organizers of the parade," Irving said at the time.

But, in a last minute effort, after a judge upheld the city's decision on Friday and parade organizers threatened to sue, city officials later announced that same day they were able to gather enough officers to work and provide security after offering triple over-time pay.

"The message of Pride is that everyone is welcomed. I think that all are loved and all are welcomed to be here," said Joann Lagman. "So, I'm very grateful for the police that were able to be here today."

With watchful eyes patrolling the crowds in every direction, the parade went on without a hitch, with plans now also set for next year.

"It's easier, yeah, hopefully! And, we're going to look sickening for next year, too," said parade participant Jaidyan Delarosa.