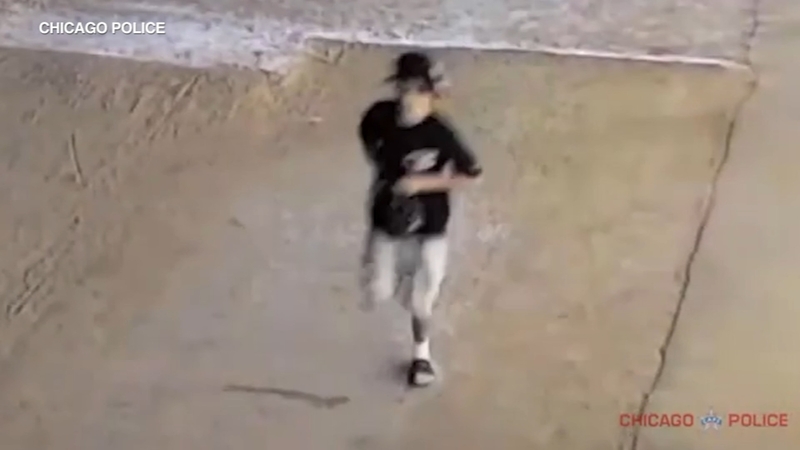 CHICAGO (WLS) -- A man was shot on North Avenue Beach Tuesday night, and, shortly after, three Chicago police officers were injured while breaking up a fight in nearby Old Town.

During a press conference Wednesday afternoon, CPD Superintendent David Brown said groups of young people began showing up to the beach about 4 p.m. Tuesday, responding to a "flyer" posted online, encouraging people to come to the beach.

Just after 9:45 p.m., Chicago police said a 19-year-old man was outside at North Avenue Beach when he was shot multiple times by another man.

In the video you see the man pause and toss a bag before continuing on.

"One of the two tossed a fanny pack which was recovered, and a Glock handgun with an extended magazine was recovered from that bag," CPD Supt. David Brown said.

The victim was taken to Illinois Masonic Medical Center in critical condition, where he has since been stabilized.

According to police, the one man was taken into custody by responding officers. But the man who tossed the fanny pack is still on the run, and police hope someone recognizes him from the newly released video.

"I find it heartbreaking, and everyone talks about saying something has to be done, and nothing is being done," said Karen Wieser Silverman, who lives nearby. "I've lived down here in the city since 1991 and never once did I think about walking on the lakefront - now, all the time."

Police said hundreds of people were at the beach before the shooting, in what Alderman Michele Smith called an illegal gathering.

"We are outraged, having guns on our beaches is unacceptable," she said.

She now wants a tighter perimeter around the beach and for metal detectors to be installed.

"We are losing tourism and losing innocent human lives for something that they need to find a bigger picture to stop this," Wieser Silverman said.

Three young women who were at the beach said a few fights had broken out before the shooting happened. They heard someone say, "Somebody got a gun, somebody got a gun" before hearing at least six shots, according to the women, who asked not to be named.

"We just heard shots and ran," one of the women said.

"Our manager was like, 'Alright, everybody has to stay inside, nobody can get out and nobody can leave,'" said Cesar Herrera, witness.

CPD said another suspect remains at large, but charges are pending for the one in custody.

Meanwhile, while crowds were dispersing the beach Tuesday night, a fight broke out at North Avenue and Wells Street, about 10:50 p.m.

Three officers were injured there, and a 16-year-old girl, and two 15-year-old boys were taken into custody.

One officer suffered scrapes and lacerations to the arms and was treated and released on the scene.

"I am extraordinarily concerned. I am worried about whether we are supporting the police the way we need to," said Adam Hoeflich, who also lives nearby. "Something has to change, and, from my perspective, that means moving more police from desk jobs and putting more civilians in those jobs, so we can focus on violent crime."

Hoeflich is urging the city to hire more police and offer incentives to do so.

"Right now we have an overwhelmed police force that is losing time off and vacation time and working double duty in a way that's just not sustainable," he said.

Charges for the 16-year-old are now pending in that case.