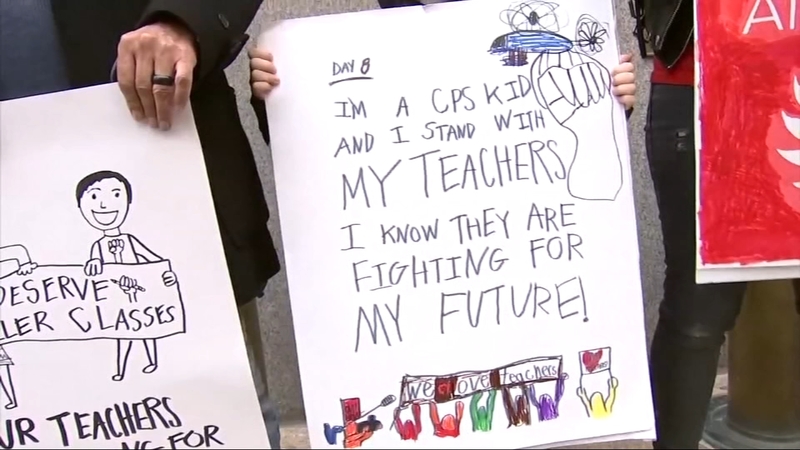 CHICAGO (WLS) -- Tension between Chicago Public Schools and the Chicago Teachers Union was close to a snapping point Monday night as the teachers strike finished out its 12th full day.

"We found $100 million," said CTU Vice President Stacey Davis Gates. "We need $38 million of it. If that happens tonight, kids are back in school."

Chicago Public School classes are canceled again Tuesday as negotiations between the city and the union continue. If the standoff continues past Tuesday, it will make this teachers strike the longest in nearly 30 years.

"We have a proposal on the table, nearly a half a billion dollars of investments that addresses all the key issues," said Latonya McDade, Chief Education Officer of CPS.

CPS executives said the written offer includes investing $70 million in staffing to ensure a nurse and social worker in every school and $25 million to reduce class size. But CTU said their researchers discovered the district has more cash to offer up.

"We just found about $100 million of it to sign a deal," Davis Gates said.

"At the end of the day, the $38 million is inaccurate," CPS's lawyer responded.

"We also need the union to make compromises," McDade said. "We are a district that is still borrowing $1 billion to keep the lights on."

Each side said they're prepared to sign, but again Tuesday students will be out in the street instead of in the classroom.

CPS high school students marched to City Hall in support of their striking teachers, and according to the union president there is currently no end to the strike in sight.

"I think she's digging in for a long strike," said CTU President Jesse Sharkey of the mayor. "She's testing our resolve, and that's a mistake."

Even though SEIU has reached a tentative deal, members joined the picket lines Monday in support of CTU.

Sharkey said the strike is starting to take its financial toll on teachers, but they remain committed to their cause.

"We've given them a deal that guarantees social workers and nurses in every school every day and pays the average teacher nearly $100,000 and reduces class sizes because we want to sign that deal right now and that is the deal that is on the table for CTU," Jackson said.

"I don't get their math," CTU President Jesse Sharkey said, disputing those figures with other union members. "If you make $100,000 raise your hands. So this is an entire crowd of teachers. This is a crowd of the highest paid teachers and none of us make $100,000."

Teachers said they are also negotiating for a half hour of teacher prep time, something that was cancelled by the Rahm Emmanuel administration.

"They made a statement in 2012. But in 2019, they're looking to achieve real gains embedded in the contract around staffing and class size, along with doing better financially," said Bruno, who co-authored a book on the 2012 strike. "They're really continuing that strike from 2012. I think they see it now as core, as central, that they need to get that out of the bargaining agreement."