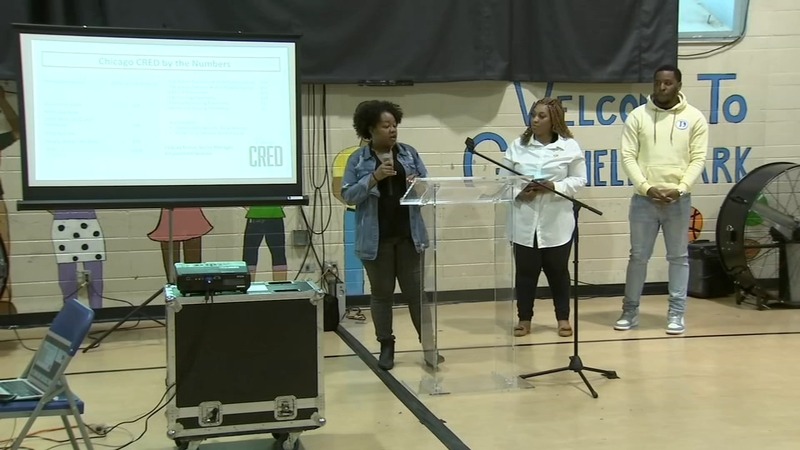 CHICAGO (WLS) -- Several youth and community organizations came together Wednesday to share their progress with keeping the city safe going into the summer months.

The outreach team for Chicago CRED, a violence prevention organization, is mapping out their game plan and figuring out what hotspots they should canvas on the West Side.

Their outreach on the South Side helped Rasheniece White-Donaldson, who says she had turned to life on the streets after suffering childhood trauma. But after finishing Chicago CRED's program, she's now part of their team as a life coach.

"Back in the day, it used to be it takes a village to raise a child," White-Donaldson said. "We don't have that anymore. But working with Chicago CRED, that's pretty much what it is, you have that whole village.

White-Donaldson shared her experiences at a summit in Garfield Park with other violence prevention organizations, which discussed their work in the community.

"The men we serve are 45 times more likely than average to be shot or killed," said Jorge Matos, with READI Chicago.

Looking ahead to the summer months, participants say their boots-on-the-ground approach to violence interruption is needed more than ever.

"From 2016 to 2019 there was a drastic reduction in shootings and homicides and we're gonna get back to that place with our violence reduction strategy in Chicago," said Chris Patterson, IDPH Office of Violence Prevention.

And statistics show that violence prevention efforts are making a difference.

According to the Chicago Police Department and the ABC7 Data Team, year-to-date, there has been a drop in shootings in the West Garfield Park, Englewood and Roseland neighborhoods.

"First quarter of this year, January through April, we moved things in the right direction," said Arne Duncan.

However, according to Duncan, May did not get off to a great start. But he says he does not agree with the recent curfew put in place by the mayor. He said what will make a difference is investment.