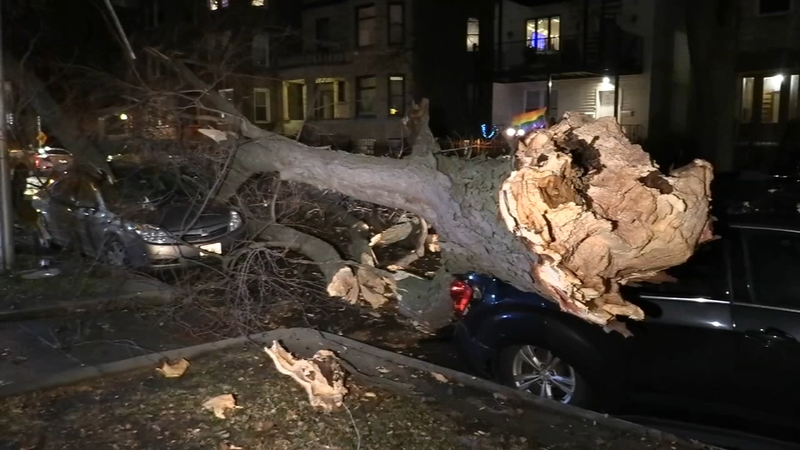 There is damage all across the Chicagoland area: On Argyle Street, trees and branches snapped and came slamming down on cars below; in some cases, streets are blocked with large trees down in the road.

"Ya it was pretty nasty; it was a bunch of cars, and it sounded like a big crunch," said Tyler Wilsey, whose car was damaged. "And it was just like, 'oh man,' everyone on the whole block came outside to see what was going on."

Wilsey's car has damage to the windshield, both side mirrors, the hood and some front-end damage.
SEE ALSO | Wind causes semi truck to crash, fall off Dan Ryan Expressway

The same damage can be seen across Evanston, where light poles and street signs are down.

And heavy winds pulled the aluminum from the Radisson Blu Aqua Hotel downtown.

The powerful winds almost knocked people over as they tried to walk their dogs or head outside.

Here's how to make sure your lights, garlands and inflatables stay in place with high winds expected.

So far there have been no reports of any serious injuries but there is a lot of mess to clean up.

At one point, 100,000 were without power, but as of later Thursday morning, more than 80% were back online.

A ComEd spokesman gave the latest on power restoration amid high winds.

"There is still a bit of high wind situation going on, so that affects some of our trucks, particularly our bucket trucks," ComEd spokesman Tom Dominguez said. "We have to be careful about sending them up in high winds, but what we are seeing right now, because a lot of the outages happened in the western and northwestern areas, there are a lot of big trees, so that takes a lot of time to clear."

More than 1,500 crews were out working to restore power.

The Chicago area braced for potentially damaging winds Wednesday, with gusts up to 60 mph, as a low pressure system bore down on northern Illinois.
Meteorologist Greg Dutra said this area did see wind gusts between 50 and 60 mph.

The Chicago area is bracing for potentially damaging winds, with gusts up to 60 mph, as a low pressure system bears down on northern Illinois.

As of about 11:30 a.m., O'Hare has reported a total of 45 cancelations and Midway has six, according to the Chicago Department of Aviation.

A light pole crashed through at Canal and Van Buren streets early in the evening Wednesday; an Old Town tree crashed down onto a vehicle in the 1400-block of North Wells; and loose bricks on a vacant building at 56 E. Chicago Ave. brought out Battalion 1 from the Chicago Fire Department to manage the hazard.

Another record was set at midnight, when the temperature hit 66.