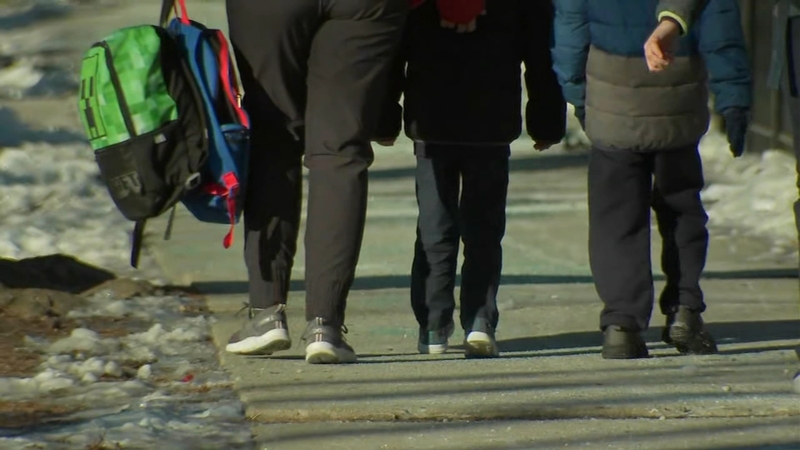 CHICAGO (WLS) -- The Chicago Teachers Union said it is suspending its remote work action after a House of Delegates vote while its members vote on a deal with Chicago Public Schools.

The union tweeted Monday night that the remote work action is suspended while rank-and-file members vote on the proposed agreement negotiated with CPS and Mayor Lori Lightfoot.

The Chicago Teachers Union House of Delegates has voted tonight to suspend the Union's remote work action while rank-and-file membership votes on the proposed agreement.

The union's 700-member governing body voted 63% to 27% in favor of ending the remote work action, bringing to a conclusion a week-long stalemate that impacted some 300,000 students.

"I'm ultimately proud the Chicago Teachers Union took a stand," said CTU president Jesse Sharkey. "We're going to keep doing what's right as we navigate this. It's not a perfect agreement but we'll hold our heads up high, as it was hard to get."

Mayor Lightfoot said Monday night that teachers will be back in classrooms Tuesday, and students will return to school on Wednesday. Classes are still canceled for students on Tuesday as teachers prepare to return to work.

The full CTU rank and file membership still needs to approve the deal and is expected to vote on it later this week.

Among the highlights of the deal is an agreement to expand testing of students, but not the opt-out testing program the CTU had sought. CPS did agree to a set of metrics that would trigger a move to remote learning for individual schools, but not a district-wide metric as the union had wanted.

RELATED: Lightfoot optimistic deal between CPS, CTU is on horizon

The mayor said there will also be new incentives to increase the number of substitutes in the district. Lightfoot said. She said the full details of the deal will be released after the agreement is ratified by the full CTU membership.

CPS CEO Pedro Martinez said the district remains committed to the safety of teachers, staff and students. The agreement proposed extends through the end of summer school, Lightfoot said.

"Some will ask who won and who lost," Mayor Lightfoot said. "No one wins when our students are out of the place where they can learn the best and where they're safest. After being out of school for four days in a row, I'm sure many students will be excited to get back in the classroom with their teachers and peers. And their parents and guardians can now breathe a much-deserved sigh of relief."

"The mayor said she will be relentless and prosecuting a case, but the mayor is not a prosecutor and I'm not a criminal being prosecuted," said CTU president Jesse Sharkey.

Monday marked the fourth straight day CPS students have been out of class.

CTU gathered with city leaders and parents Monday morning at Spry Elementary to highlight some of the issues on the table.

"I want a healthy community where my families can know that they are safe in sending their kids to school," said Michael Rodriguez, 22nd Ward alderman.

What are main sticking points between CPS, CTU?

The union's hope was to start remote learning on Wednesday, with the goal of returning to in-person instruction on January 18. Mayor Lightfoot and CPS were not on board with that.

"She's being relentlessly stubborn," Sharkey said. "She's relentlessly refusing to seek accommodation and we're trying to find a way to get people back in school."
CPS said it would allow remote learning on a school-by-school basis, but not to the union's standards.

"They're saying three quarters of students of a school would have to be out sick before we can use it," Sharkey said.

In a one-on-one interview with ABC7 political reporter Craig Wall, the mayor shot back.

"If I had a dollar for every time some privileged, clouted white guy called me stupid I'd be a bazillionaire," she said. "This has got to be about getting our kids back in school."

CTU's proposal also requested that CPS randomly test at least 10% of the student and staff population every week at every school. That program would allow students to opt-out. The proposal would also require CPS to pause in-person learning for 14 days and transition fully to remote instruction citywide if the COVID-19 test positivity rate in Chicago increases for seven consecutive days, remains at 15% higher than the rate from one week prior for each of those days and reaches 10% or greater on the seventh day.

CTU members also requested that any school with 25% or more of its staff out due to COVID-19 cases or exposures for two consecutive days will be transitioned to remote learning. For schools with 100 or more employees, a transition to remote learning will take place if those cases reach 20%.

They also introduced rules for remote learning if student exposures reach certain percentages. Elementary schools would transition to remote learning if more than 30% of students are instructed to quarantine or isolate. High schools and departmentalized middle school programs would go remote if more than 25% of the total student population had received such instruction.

Spry Elementary in Little Village has seen the worst of the COVID surge, as the union said 15 of 18 classrooms there have at least one infected student.

"Mayor, please remember your promise," said Joanna, Spry Elementary School parent. "You promised this city is going to be the future for my son... just keep your promise."

Other parents in the district are ready for negotiations to wrap up so kids can get back to class.
"I think my kids' education is being hurt by it," said parent Adam Solovy. "I don't think kids should be on a computer for eight hours a day."

"It's the worst case of déj vu, like last January, being held hostage by the feelings of a union leader instead of set free by science that schools are safe," said Sarah Sachen, CPS parent.

Byrne Elementary parents on the Southwest Side said they refuse to let their children go remote, while others with children at schools with high COVID rates stand with the union.

"Right now the school is not safe in there, I fear for my kids because it is not fair to them," said Joanna Ruiz, CPS parent.

Other parents are calling on both sides to allow parents to have a seat at the table.

"If CPS and CTU cannot come to an agreement that allows our kids to resume learning immediately, then clearly they need some adults in the room who can figure it out," said Blair Flowers, CPS parent and member of Kids First.

Some schools are open Monday for students that have nowhere to go during the school day.