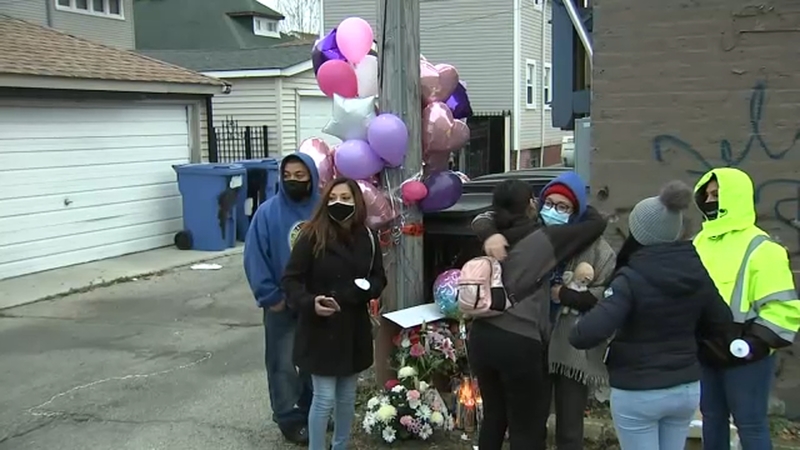 CHICAGO (WLS) -- A $1,000 reward is being offered in the murder of a 16-year-old girl who was shot in the head while trying to intervene in the beating of a man in Gage Park Thursday.

Lizette Mata, of Little Village, was shot to death while returning to help the man who was being attacked by a group of people, according to police.

She and the man were walking home in an alley after eating at a restaurant when four males exited an SUV and confronted them in the 5200 block of South Kedzie Avenue, according to a Chicago police spokeswoman.

The males began to hit and beat the man about 7:10 p.m., and the girl ran to a nearby friend for help, police said.

As the girl and friend returned running to the man being beaten, someone in the group fired shots, police said. The beaten man told investigators he saw the girl fall to the ground.

She was rushed in critical condition to Mount Sinai Hospital.

A 16-year-old girl was shot to death Thursday while returning to help a man being beaten by a group of people in the Gage Park neighborhood.

The beaten man, 18, also told police he didn't know anyone in the group who fired the shots, but he believed the incident was gang related, police said.

Community activist Andrew Holmes urged people in the area to check their security cameras for video that could help solve this crime.

The shooting happened in Chicago Police's 9th District, which has recorded at least 34 other murders in 2020 through Nov. 29, according to official police statistics. Murders have increased 89% in the district since last year. By comparison, the district recorded 18 murders in 2019 during the same period.

Citywide, gun violence and murders have increased more than 50% over last year. Through the end of November, police reported more than 3,800 shooting victims in Chicago this year alone.