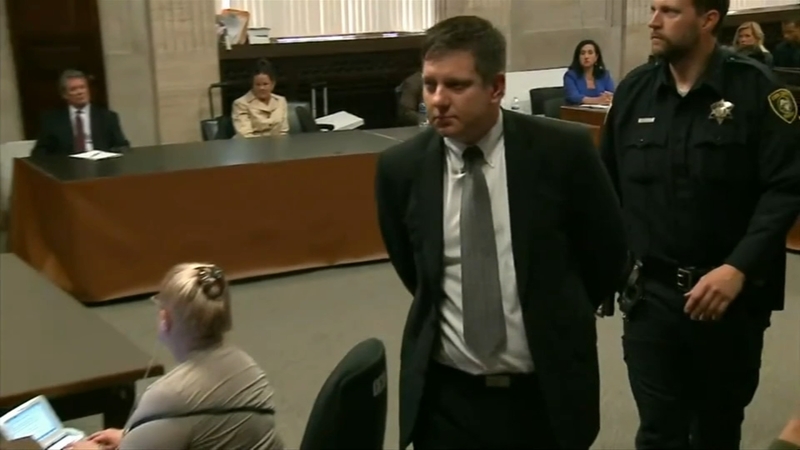 CHICAGO (WLS) -- Former CPD officer Jason Van Dyke is set to be released from prison after only serving part of his sentence for murdering Laquan McDonald, and activists are asking the Mag Mile Association to use their influence to have federal charges filed against him.

The coalition of community activists took their push for justice for McDonald to North Michigan Avenue Thursday.

Fearing the possibility of unrest upon Van Dyke's release, they're calling on the Magnificent Mile Association to help them pressure the U.S. Attorney and Department of Justice to charge Van Dyke with federal civil rights violations for McDonald's slayings.

In 2014, Van Dyke shot the Black teen 16 times. Video of the shooting from a police dashboard camera, released more than a year later, was a key piece of evidence in the trial and inflamed public reaction across the country. Van Dyke was found guilty of second-degree murder and 16 counts of aggravated battery, one count for each shot that hit McDonald.

No one from the association immediately responded. The request from Calloway, who helped make the dascham video of McDonald's shooting public, came as the group of local leaders asking again for the CTA's transit union, Local 241 and Local 30, to support their efforts by staging a complete system shutdown starting January 31 and lasting until federal charges are filed.

"If Jason Van Dyke was a Black man, would we be standing here?" wondered Dr. LaShawna Littrice of Make Noise For Change.

Van Dyke, 43, is now scheduled to be released from prison on February 3 after serving just under three and a half years of an 81 month, or six year and nine month, sentence for McDonald's murder.

Chicago activists are comparing his case to that of former Minneapolis police officer Derek Chauvin, who was federally indicted just weeks after being convicted at the state level of murdering George Floyd.

"We know that the facts of this case is there was a white man who shot 16 bullets into a Black boy," said Ja'Mal Green, community activist. "That is racially motivated."

A prior civil rights investigation was launched following McDonald's death, but nothing came from it. And while the cases are alike in some ways, ABC7 Legal Analyst Gil Soffer said there are differences.