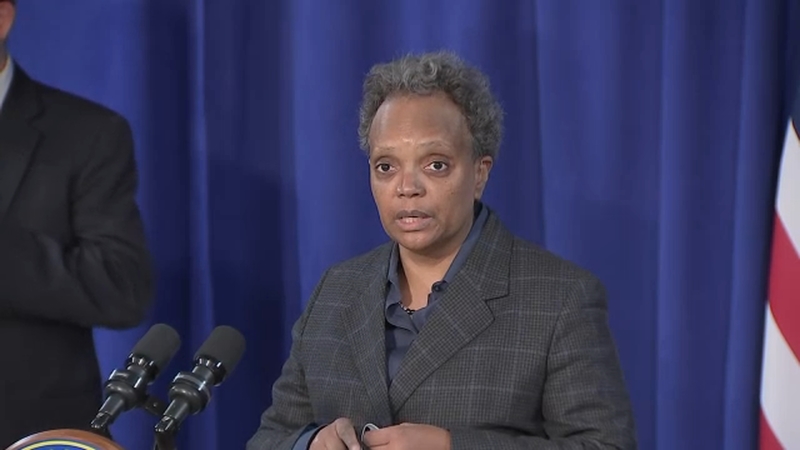 Lightfoot sued by lawyer claiming he was berated over Columbus statue

CHICAGO (WLS) -- Mayor Lori Lightfoot is now a defendant in a defamation lawsuit, which alleges she used language in a meeting with Chicago Park District lawyers that ABC 7 cannot repeat on-air.
The lawsuit, filed by a then-Chicago Parks District lawyer, alleges Mayor Lightfoot told the attorneys: "You are out there measuring your (expletives) with the Italians seeing whose got the biggest (expletive)."

The lawsuit alleges the mayor went on to say, "I've got the biggest (expletive) in Chicago."

While Mayor Lightfoot was in public Thursday morning for an unrelated event, she did not talk about the lawsuit.

The language in the lawsuit shocked the president of the Joint Civic Committee of Italian Americans. He said he checked the eyeglasses he was wearing because he couldn't believe such language would be used by a "mayor of a world-class city."

"Talking about genitalia, are you kidding me? This is where we are at right now. This is very serious," said Ron Onesti, President, Joint Civic Committee of Italian Americans, or JCCIA.

Onesti said after the Christopher Columbus statue was taken down in Arrigo Park in 2020, the organization wanted to use it in the 2021 Columbus Day Parade and was working with park district lawyers to make it happen.

The lawsuit alleges when Mayor Lightfoot heard about it, she proceeded to "berate and defame" a park district attorney during a meeting and threatened to have him "fired."

"Once you see it writing, and you see how terrible these words are and how vulgar. It's just sickening anybody would say this," Onesti said.

The plaintiff in this case is George Smyrniotis. His lawyer says they will not talk publicly because, he says, the complaint speaks for itself.
According to the lawsuit, George Smyrniotis was forced to resign, suffering a loss of income and reduced pension.

Chicago's law department had a one-sentence response: "The City has not yet been served with a complaint and will have no further comment as the matter is now in litigation."

Onesti of JCCIA said the statue is in a park district warehouse now. He said, if true, the mayor's alleged language is an imminent problem.