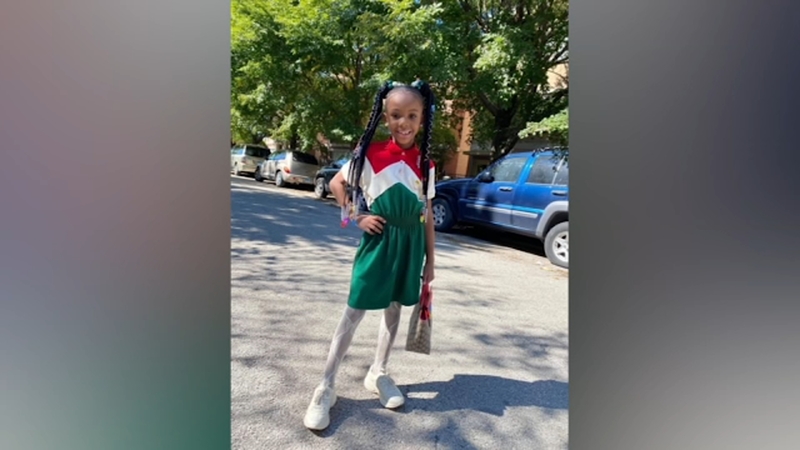 Man, 18, charged in Jaslyn Adams' murder after shot by police in I-290 chase

CHICAGO (WLS) -- The family of Jaslyn Adams is one step closer to justice now that one of the suspects in the 7-year-old's murder has been charged. However, investigators said there is still more work ahead.

Chicago police announce charges against an 18-year-old man accused in the fatal shooting of a 7-year-old girl while waiting in a McDonald's drive-thru with her dad last week. He wa

"He's being charged [Saturday] in connection with the murder of 7-year-old Jaslyn Adams," Brown said.

Those charges include first-degree murder, attempted murder and vehicular hijacking.

Adams' grandmother said she is grateful to Chicago police for getting one suspect behind bars.

Adams' grandmother said these new charges brings the family one step closer to justice but added that full closure won't come until all responsible for taking this little girl's smile away are caught.

Lewis was arrested after he led officers on a wild chase on I-290 Thursday afternoon.

Police said Lewis fled and crashed on the side of the highway near Mannheim Road before attempting to carjack another family's vehicle stopped in the traffic.

Illinois State Police said Lewis shot at police before CPD officers shot at him, hitting Lewis in the arm.

Supt. David Brown @ChiefDavidBrown and Chief of Detectives Brendan Deenihan announce the arrest and charging of Marion Lewis, 18, in the shooting death of 7-yr-old Jaslyn Adams on 4/18, and in the police involved shooting on I-290 on 4/22. @Area4Detectives #ChicagoPolice pic.twitter.com/H56hRKAdtC

In Saturday's press conference, CPD also said two guns were recovered from that scene, including an AK-47.

"Both those weapons that were on his person that were recovered, they did test positive to the murder weapons used at the scene to kill Jaslyn," said CPD Chief of Detectives Brendan Deenihan.

Investigators said Adams was shot and killed last Sunday while sitting in a car with her father at a West Side McDonalds drive-thru in Homan Square.

Brown said other people were involved and investigators believe Adams' father was the target of the shooting.

"You can run but you can't hide," Supt. Brown said as a message to those other suspects. "We are going to bring you to justice for this crime. The Adams family deserves nothing less."

Brown said there was limited information police could provide on the murder investigation as they continue to track the other people involved.