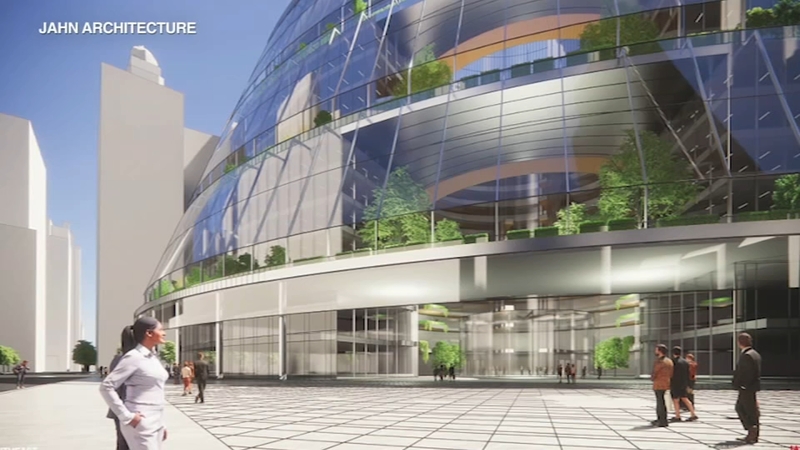 CHICAGO (WLS) -- After years of talk, Gov. JB Pritzker announced Wednesday that the state has reached a deal to sell the James R. Thompson Center, one of Chicago's most recognizable buildings.

The CEO of the developer that will buy the Thompson Center revealed renderings showing what is being called a "bold plan" to preserve and renovate the iconic downtown building with a 17-story atrium, despite the problems with heating and cooling that have plagued it since the building opened in 1985.

Here is the architectural renderings of what the Thompson Center will look like after a $280 million dollar makeover that is expected to take two years pic.twitter.com/5UBd5cXQTz

"Those problems we found were very manageable," said Michael Reschke, Chairman and CEO The Prime Group. "And actually the problems with the building really become the opportunities to make this building iconic and special."

The governor called the deal the best one for taxpayers. The state would maintain a 30% ownership stake.

"The Prime Group will be purchasing the Thompson Center for $70 million up front and, just as importantly, this sale alleviates taxpayers of over half a billion dollars in necessary deferred maintenance costs on this building," Pritzker said.

The plans call for redoing the exterior with a new curtain wall with floor-to-ceiling energy efficient windows. There will also be several levels with outdoor terraces.

"Honestly, look at how beautiful this is, so the answer is, it truly is a gem," Pritzker said.

The centerpiece will be the new atrium, which the developer likens to the Gardens of Babylon.

Architecture groups are praising the decision not only because it preserves the iconic building, but because the Helmut Jahn Firm which originally designed the Thompson Center is going to do the renovation.

"I'm ecstatic that the Thompson Center is going to be saved and it's going to be saved really, much of what we see the valuable aspects of it today - that central atrium that we love, the shape the conical shape of that building," said Lynn Osmond, President and CEO Chicago Architecture Center.

The family of former Gov. Jim Thompson, for whom the building was named, also gave their blessing to the plan.

The $280 million dollar makeover calls for retaining office space and the CTA station, and it will remain open during renovations which could begin within 12 months and take about two years.