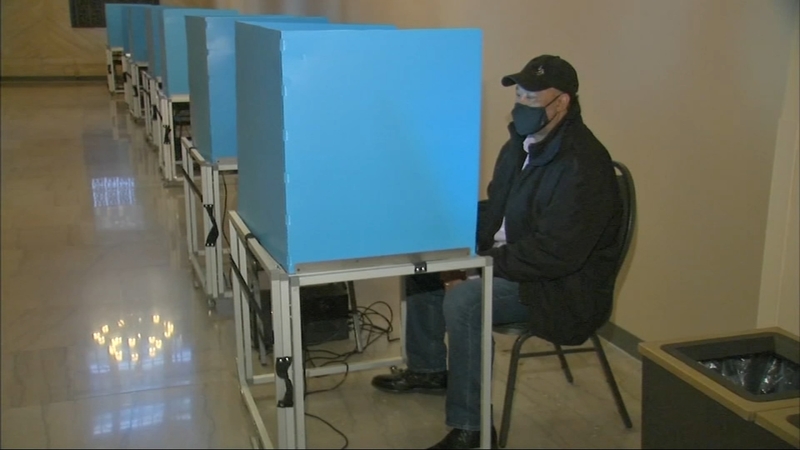 There's a big push to get people to the polls early due to the pandemic, and Monday the latest polling station opened at Chicago's Union Station.

There is an unprecedented demand to cast ballots before Election Day in Illinois. Cook County Clerk Karen Yarborough also highlighted that there's a deposit box for any mail-in ballots voters don't trust to send through the mail.

According to the U.S. Elections Project, over 27 million people have already voted in the general election.

Monday was the first time in history Union Station served as a polling location.

The brand new super site was built for suburban commuters to vote.

The effort is part of an early voting expansion across the Chicago-area Monday.

"My vote counts, I hope. Iwant to make sure that we have the right leadership in place," he said.

Dunbar joined the millions of American voters who have already cast their ballots ahead of Election Day.

With Election Day just over two weeks away, early voting is expanding in the Chicago area.

For those Cook County residents who have still has to commute from the suburbs, Union Station has made it easier to embrace democracy.

"As soon as I got off the train, I made sure that I ran over and voted on the first day," said Keli Wells, an early voter.

Voters said they hoped to avoid crowds, some specifically because of COVID-19.

While many people have opted for mail-in ballots for the 2020 election, Wells said she was uneasy.

"Even though they have the boxes available to drop it off, I made the decision early on," she said.

Wells declined to share who she voted for.
Perzan said he voted to re-elect President Donald Trump, and doubted a mail-in ballot would work.

"This is the safest way to vote- in person," he said.

Dunbar said he voted blue down the ballot and planned to vote by mail but, "I had applied for absentee voting, to vote by mail, but it's taken three weeks for me to receive it."

Dunbar said as of Monday he had not received the ballot so he came to vote in person to be safe.

The election judge asked Dunbar about the mail-in ballot because there was a record of it being requested.