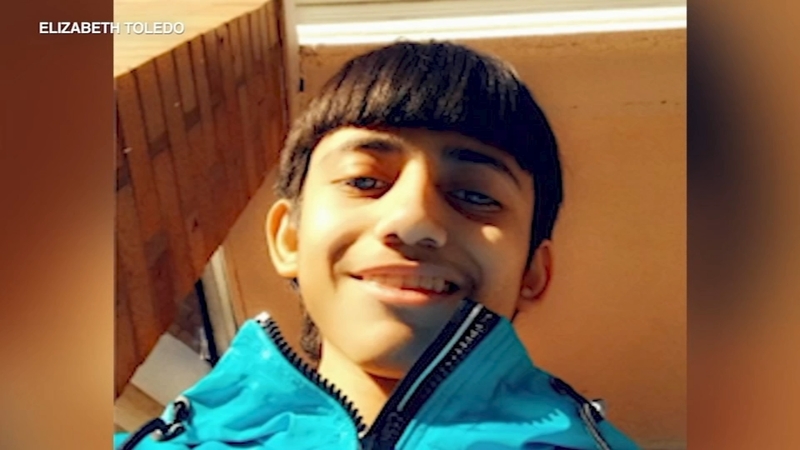 CHICAGO (WLS) -- One year after the Chicago police shooting that took the life of 13-year-old Adam Toledo, community activists in Little Village are still calling for justice and standing in solidarity with the family.

Community members brought balloons, candles and heavy hearts to mark the somber anniversary of the tragic police shooting that took a Little Village boy's life in the early morning hours of March 29, 2021.

Toledo's family joined them, still grappling with the pain.

"This is not the place where Adam deserved to die, in an alley alone at night," said Esmeralda Toledo, Adam's sister. "Thirteen years old. He had his hands up and empty."

Bodycam video shows Adam Toledo had his hands up and was not holding a gun when he was shot, but less than a second earlier appeared to have a gun in one hand, which he tossed away.

Police body camera video shows Toledo being chased down an alley near 24th and Sawyer in Little Village. An officer identified as Eric Stillman ordered him to drop a weapon, which he did before putting his hands up. A split second later, the officer shot and killed Toledo.

Cook County State's Attorney Kim Foxx reviewed the case, but announced her office would not pursue charges two weeks ago. Activists are calling for the U.S. Justice Department to intervene or for the appointment of a special prosecutor to review the case.

"Kim Foxx said now that she's not going to press charges on Eric Stillman," Armendariz said. "Who does she think she is? How is she going to allow an individual to come kill an innocent child?"

Community organizers are also putting pressure on police to move quickly to finalize a foot pursuit policy that was in the works before Toledo's death, and was then put into place last summer. A final version is now in the works.