Illinois leads the nation in carjackings, so law enforcement and lawmakers are hoping to change that
WLS
By Michelle Gallardo and Maher Kawash 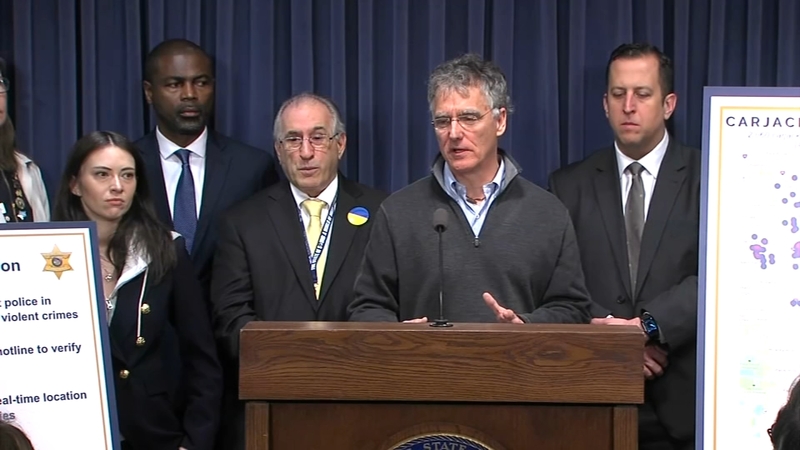 SPRINGFIELD, Ill. (WLS) -- People in Chicago are frustrated -- and for a good reason -- as carjackings are through the roof.

In one of the most recent incidents, police said a 26-year-old pregnant woman was carjacked at gunpoint by two armed juveniles near Dearborn and Washington streets in the Loop Tuesday night.

Police said the woman wasn't injured, but was briefly taken to Northwestern for observation. The suspects were arrested less than an hour later in Hammond, Indiana, where the vehicle crashed after being pursued by law enforcement.

Cook County Sheriff Tom Dart said Wednesday that with the right tools, making these arrests could be much easier.

"Virtually every car since 2015 has tracking capability, so, the question is, if it can be tracked, why is it not being tracked?" Dart said. "We are at a crisis point. This is a time where we need action and we need it now and we're desperate for it."

Standing alongside state legislators in Springfield, Dart joined in the announcement of new legislation that would require auto manufacturers to share electronic tracking information with law enforcement agencies in real-time, by setting up a 24/7 hot line to facilitate the process.

Officials said that while some companies already cooperate with law enforcement when a vehicle is stolen or carjacked, others, despite months of talks, are still holding out.

RELATED: Chicago police warn of series of carjackings, armed robberies on Near West Side, in Albany Park

"Last year we had 2,100 carjackings in Cook County, the majority of them in the City of Chicago. Los Angeles and New York combined had less than 1,000," Dart said. "This is what could bring this to an end. Are we ever going to end carjackings completely? Probably not. But can we get it back to numbers that are understandable in any society? Yes."

If the changes to the Illinois Vehicle Code are approved, they would apply to every manufacturer that sells vehicles in the state.

"There's no two issues that have been more talked about, more disturbing to anyone, than the shootings and the carjackings," Dart said.
Often, the stolen cars are used in other crimes, making it even more important to track down those vehicles right away.

"If we can track that right away, that other crime never occurred," Dart said.

The legislation would also increase police presence around the surrounding suburbs of Chicago with the help of additional state grants.

The bill is set to be discussed in the Senate Executive Committee.