Mayor Lightfoot satisfied with her performance in face of challenges from COVID, violence, CPD 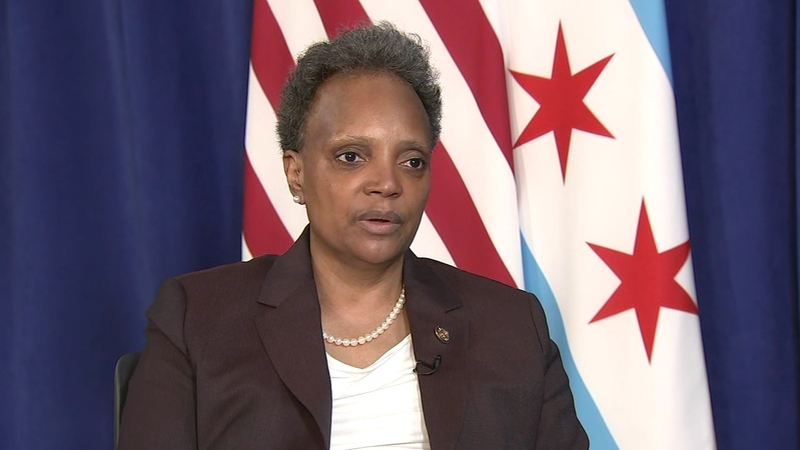 She has her critics when it comes to her performance. Dozens of protesters gathered near her home in Logan Square Thursday evening.

RELATED: Critics give Lightfoot a failing grade, protest held her her home

Mayor Lightfoot marks her second year in office facing several critical issues, including the lingering pandemic and the high number of shootings. She also remains at odds with both the police union and the teachers' union.

Mayor Lori Lightfoot discusses the decision to grant interviews on her second anniversary exclusively to reporters of color.

Still, Lightfoot said she is very satisfied with her performance under difficult circumstances.

"I think given the challenges that we have faced with a global pandemic, a historic economic meltdown, and all the civic unrest and the conversation around systemic racism, police accountability, I think we've got some things that we accomplished for the residents of this city," the mayor said. "More needs to be done, but I feel very satisfied we're moving in the right direction."

But those accomplishments have are largely overshadowed by gun violence and crimes. Homicides are up 17 percent year to year, and the number of shootings are up 34 percent over the same period a year ago. So far this year, 108 juveniles have been shot and carjackings have more than doubled.

"You raise the issue about the increase in gun violence, first and foremost we're going to fight a losing battle when people can drive across the border to Indiana and other states and literally buy military grade weapons with any significant kind of background check and bring those weapons to the streets of Chicago," Lightfoot say.

The mayor said that Chicago police have taken 4,100 guns off the streets so far this year, on track to outpace New York and Los Angeles combined.

"We need the federal government, which is uniquely qualified to help cities and states like ours, to step up and do the right thing," she said. "Our public safety ecosystem has been directly and dramatically impacted by COVID."

When it comes to policing, the mayor has faced criticism for failing to follow through on promised reforms to the Chicago Police Department.

"Well we've done a lot on police reform and accountability in my time as mayor and let me give you a couple of examples," she responded. "Allowing the investigative authorities to investigate anonymous complaints, not destroying disciplinary records, shielding the name of complaining victims to protect against any retaliation."

With very public mistakes by CPD, like the wrong raid on Anjanette Young's home, and civilian complaints during the unrest of nearly a year ago, Lightfoot acknowledged the department has a legitimacy problem, one she and Superintendent David Brown are working to solve through mandatory training and community involvement.

"We have made great strides and we continue to be focused on making our police department more respectful, more constitutional, and really pushing them to have authentic relationships with members of the public," Lightfoot added.

Having already faced challenges in her first 2 years in office, Mayor Lightfoot commented on future hurdles including a possible elected school board and pensions.

The mayor has faced calls, in the wake of George Floyd's murder, to defund the police and put that money into the community.

"It's not an either or, because what I also hear from folks is 'Mayor, please do not take away police resources in my neighborhood,'" Lightfoot said.

Lightfoot has also been criticized for failing to fulfill promises to improve the lives of Chicago residents, and to the Chicago Teacher's Union, like an elected schoolboard. Lightfoot said she favors a mixed school board, comprised of both elected and appointed members, in part because of the $500 million subsidy that the city gives CPS each year.

"You want to take away the right of the mayor and the City Council to exercise any oversight control over CPS, then who's going to be responsible for that money?" she said.

Chicago's finances also remain in bad shape. The city is on the brink of a pension crisis, and the mayor needs Governor JB Pritzker and Springfield to help.

"The promise that pensions are, and I believe that to my core, will be illusory if the pension funds go bankrupt and we are teetering on the brink, and so adding more burden onto those underfunded pensions without addressing the underfunding is a mistake," Mayor Lightfoot said.

Lightfoot would not discuss in specifics her plans beyond the next two years, but she said her fate belongs to the people.

"They want me to focus on them," she said. "The politics will take care of itself."

RELATED: Mayor Lightfoot only granting interviews to reporters of color ahead of 2nd anniversary

The mayor has yet to detail her plan for police oversight, as the City Council's Black Caucus demands civilian oversight.

As for police reform, the mayor said she has made strides when it comes to transparency and annual training.

"We went from zero hours to now 40 hours of mandatory training of officers, veteran officers on a range of things -- use of force, procedural justice, de-escalation. That is very significant progress," she said.

Mayor Lightfoot said she would only grant interviews to Black and other journalists of color for her second anniversary, part of a demand for more diversity in Chicago media and particularly media that covers City Hall.

In a letter, she wrote that "it is impossible for this glaring lack of diversity not to be reflected in the daily coverage of government, politics, and city life every single day."

"She makes a really great case about diversity and the lack of diversity, but she doesn't make the case about what's wrong with the way she's being covered," political analyst Laura Washington said. "What she says implies that she's being covered unfairly; there's implicitly or explicitly bias but she never makes the case for how that plays out in the media."

But former ABC7 political reporter Charles Thomas saw the mayor's move as an attempt to distract from other more important issues.

On her 2-year anniversary, Mayor Lightfoot announces a program that will award $10 million in grants for community projects.

Mayor Lightfoot used the occasion of her anniversary to announce the creation of the Chicago Works Community Challenge, which will give out seven grants of $1.5 million each to Chicago's seven planning regions.

"Chicago Works Community Challenge serves as our city's latest step in the mission I set out to accomplish two years ago, which is to deliver the investments and change our residents need in order to thrive," said Mayor Lightfoot. "Like many of the other programs we've launched over the past two years, community input will play a huge role in this initiative because our residents know their neighborhood best and deserve to have a say in what projects are developed in their neighborhoods. I am grateful to each and every one of the City, community and business partners who have not only stepped up to make this initiative a reality but have worked closely with my administration to create a better, more equitable and more inclusive Chicago."

The mayor's office said she expects the grants to go toward projects such as playground improvements in parks, co-working space or meeting room upgrades in libraries, and community gardens or playgrounds on vacant lots.

Applications will be available starting June 1 and will be accepted until September 1. Winners will be chosen based on criteria including: financial feasibility, community preferences, project design, and impact. The aim is to break ground on the projects in 2022.

She released a new video Thursday morning, touting her accomplishments, saying "Over the course of the campaign, I heard your concerns and that's why on Day 1, I started making government work for you."