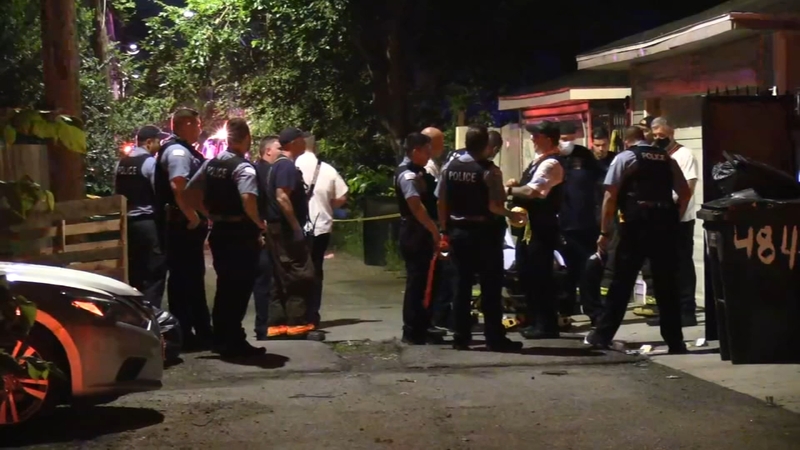 CHICAGO (WLS) -- Chicago's top cop once again blamed the courts after another violent weekend in which 70 people were shot, and 12 of them were killed.

"We are arresting violent offenders, the courts are releasing these people back into the community," Chicago Police Supt. David Brown said. "We're not obviously going to quit. We are dedicated and committed."

Supt. David Brown called out the court system for releasing violent offenders back into the community after 70 people were shot, 12 fatally, in Chicago over the weekend.

After another weekend marred by shootings and murders, Supt. Brown refused to concede the police department's strategy is not working, or that it needs to be changed.

"What can Chicago police officers do? They can continue to be brave and courageous, committed and dedicated in arresting violent offenders," Brown said. "My question to you is, what the courts can do different rather than release violent people back to these communities to create an environment of lawlessness."

Brown continued to shift the focus away from what police can or should be doing, instead blaming the courts, which have been the source of his frustration and finger pointing all summer.

"We can only arrest violent offenders and we're doing it at the highest level historically in the Chicago Police Department's history," Brown said.

"We've already had 89 people killed in the city of Chicago just this month," Lightfoot said. "That's a breathtaking number. It cannot be on CPD alone."

At a community event, Lightfoot said Monday that everyone has to be asking themselves what more can they do. She defended the police anti-violence strategy.

"I believe that the plans and the deployments that they have in place have been effective, but the challenges we're seeing an unprecedented level of violence here in our city 22 that isn't abated since Last year," Lightfoot said.

"I think people, have given up, to a very large degree to policing and especially when it comes to policing that's going to be beneficial to them," said Prof. Lance Williams, Northeastern Illinois University.

The chief judge's office reiterated what it has said before, that studies show less than 5% of those on electronic monitoring for felony gun arrests were rearrested while out.

Williams, who studies urban communities and violence, said he believes police are doing the best they can, but that they can't solve the violence problem alone.

Chicago police address gun violence in the city after 70 people were shot, 12 fatally, over the weekend.

Those districts cover some of the deadliest neighborhoods in Chicago, according to Sun-Times data: Austin, Englewood, East Garfield Park, Auburn-Gresham, West Garfield Park and Humboldt Park.

The city has recorded at least 426 homicides this year, down 1% from 432 homicides last year at this time but up 48 percent from 289 two years ago.

In the weekend attacks, the 17-year-old and a 15-year-old boy were in the backyard of a home in the 6800 block of South Peoria Street in Englewood when someone opened fire about 1:15 a.m. Sunday, police said.

The 17-year-old was shot in the chest and was taken to the University of Chicago Medical Center, where he was pronounced dead, police said. He hasn't been identified.

The 15-year-old was hit in the stomach and taken to the hospital in serious condition, police said.

Around the same time, a man was shot to death in a drive-by in Austin on the Northwest Side.

The man, 37, was standing on the sidewalk with a group of people in the 1700 block of North Moody Avenue when someone in a blue car fired at them, police said.

He was hit in the head and taken to Loyola University Medical Center in Maywood, where he was pronounced dead, police said. The Cook County medical examiner's office hasn't identified him.

In Chatham, a man was shot and killed as he stood in front of a 24-hour convenience store on a busy street in Chatham on the South Side Saturday evening.

Someone walked up to Theodore Smith in the 500 block of East 79th Street and shot him in the chest about 8:15 p.m., according to Chicago police and the Cook County medical examiner's office.

Smith, 44, was taken to the University of Chicago Medical Center, where he was pronounced dead, police said. Smith was an employee of the store and was smoking a cigarette when he was shot, a person at the scene told the Sun-Times.

In South Shore, a 19-year-old man was fatally shot Friday night. Janarrow Deberry was near the sidewalk in the 7000 block of South Merrill Avenuewhen someone opened fire, striking him multiple times, about 7:30 p.m., police and the medical examiner's office said.

Deberry, of Plainfield, was pronounced dead at the University of Chicago Medical Center, police said.

At least seven other people were killed in shootings over the weekend.

In nonfatal shootings, five men were wounded in an attack early Sunday in Austin on the Northwest Side.

They were gathered in the backyard of a home about 12:30 a.m. in the 4800-block of West Race Avenue when a male suspect entered and opened fire, police said.

The men, 23, 30, 36, 48 and 50, suffered gunshot wounds to the lower body, police said. They were transported to Stroger and Mt. Sinai hospitals, where they were stabilized.
Two people were shot, including a 17-year-old boy, Saturday in the Englewood neighborhood.

The pair were standing in the street about 12:45 a.m. in the 7100-block of South Ada Street when someone inside a black-colored vehicle fired shots, police said.