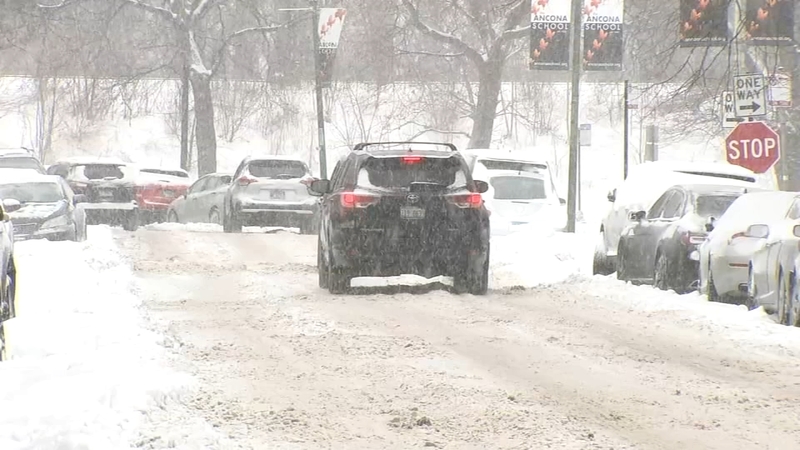 The National Weather Service issued a Winter Weather Advisory for the area, which expired at noon Monday in Illinois and 3 p.m. for areas in northwest Indiana.

However, a Wind Chill Advisory will go in effect for Kane, DeKalb and McHenry counties from midnight to 9 a.m. Tuesday, NWS said.

Chills in this area could get as cold as -20 to -25 degrees, according to ABC7 meteorologist Larry Mowry. Frostbite can occur on exposed skin in 30 minutes with wind chills this cold.

The recent snowfall forced the city to activate its phase two snow program for the second time in two days.

Right now, many main roads and side streets are looking better after the winter storm move through the area the past few days.

The Chicago Department of Streets and Sanitation said more than 200 salt spreaders are working to keep streets clear, focusing on main arterial streets. Monday afternoon, DSS announced they were sending vehicles to clear side streets.

The winter blast blew through during the morning commute. Plow trucks remain out on the roads Monday afternoon after a slushy start to the day.

"I've got rear-wheel drive, so my car is sliding all over the place," said commuter Rodney Ephraim.

Mike Zobitz gave his family an extra 15 minutes to get to where they needed to go.

"I did, as a matter of fact. I just dropped my daughter off at school, so we did about 15 to 20 minutes, enough time for her to play in the snow and throw some snowballs."

WATCH: Drivers spinout at the I-94, Illinois Route 394

A winter storm dumped several inches of snow across the Chicago area over the weekend, causing some drivers to spin out amid slick conditions

The Kennedy Expressway was full of slush as people made their way through the heart of the city.

Rodney Ephraim had a rough commute.

"Well, I've got rear-wheel drive so my car is sliding all over the place, but I thought the city would've at least plowed the streets by now, but it's kind of hectic," he said.

A dog owner took took her dog, a French bulldog, sledding at a park in Little Italy.

As people make their way back through the rush hour traffic, plow crews across the area will remain out on the roads to make sure drivers get to their destinations safely.

Buildings in the Loop had crews out trying to clear some of it away.

"I've been noticing a lot recently that ice has just been the scariest part and it's a little bit hazardous to walking around with ice underneath and if there's snow on top. Got to take a little bit of extra time," said commuter Courtney Krznarich.

From the city to the suburbs, efforts to shovel homeowners' driveways and sidewalks is being helped out by volunteers from local police departments.

From the city to the suburbs, efforts to shovel homeowners' driveways and sidewalks is being helped out by volunteers from local police departments.

"We've seen the need for it," said Sgt. John Oakley, with the Skokie Police Department. "Doing it on a volunteer basis, just trying to help out the community. So, we put it on Facebook and got a lot of responses."

So far, nearly 40 people and counting have asked for the help, including Cindy Adler, who made her request while watching these officers at work next door.

"I need help," Adler said. "I didn't know how I was going to get rid of it. And then there are the policemen."

A 5-year-old Long Grove boy helps to clear snow with his custom plow.

While this winter blast could prove to be dangerous on the roads, it's also showing how people can come together and volunteer their time to help others.

"It is a wonderful sight! It's a great thing what they're doing and I wanted to jump on it," Adler said.

Warming centers are opening in suburban Cook County as wind chills are expected to plummet to 25 degrees below zero Tuesday night.

Residents without adequate heating in their homes are encouraged to visit a warming center to ensure they remain safe, according to the Cook County's Department of Emergency Management and Regional Security.

A complete list of warming centers is available at: https://www.cookcountyil.gov/service/warming-centers

After the snow on Monday, the bitter cold will move in on Tuesday and Wednesday.