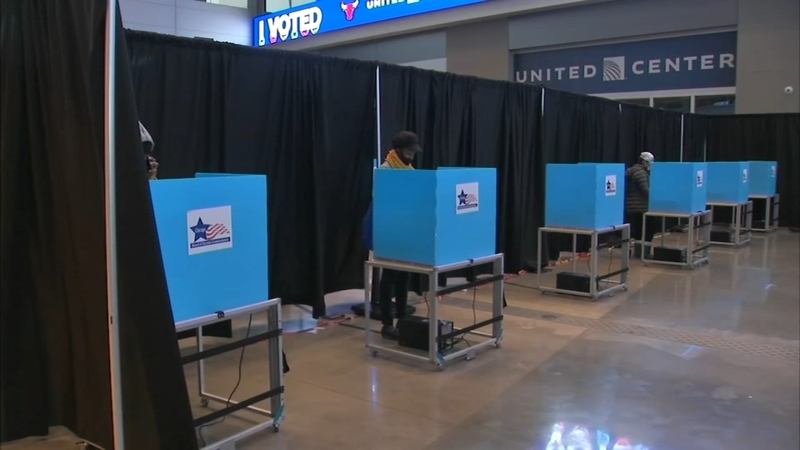 CHICAGO (WLS) -- Election Day 2020 has arrived and voters in Chicago and Illinois are making their way to the polls Tuesday.

In Chicago for the first time ever, the United Center has turned into a polling location as part of the city's expansion of voting sites to provide more options for safety due to the ongoing COVID-19 pandemic.

Polls opened at 6 a.m. in Chicago and Illinois and will remain open until 7 p.m.

Charles Weichselbaum was among those waiting in the cold Tuesday morning. He said even though Illinois isn't a battleground state, he wants to be counted in the popular vote.

"I don't think I've ever seen an election or two people are so radically different," he said.

Marcell Meyers, 23, of Chicago's West Side voted Tuesday for the first time ever.

"I feel like there needs to be a change especially in the economy and what's going on today," said Meyers.

Nakiea Love from Auburn Gresham is also focused on the top of the ticket. She stayed up all night to be first in line at 5 a.m., eager to get in and out fast.

"The pandemic, the importance of the election, the hassle, the large expectation of crowds," Love said.

Deon Branch, 21, said he voted Tuesday despite what he sees on social media.

"I'm seeing a lot of young people saying that this is careless, carefree, and that it doesn't matter, said Branch. "I need my vote to matter because everyone's saying it doesn't matter.
Concerns over the economy, racial justice, and the character of the nation are issues driving people to the polls.

"The incessant lying, it's insane, the dividing of this country, the racial tension is not seen since the 60s," said voter Mike Tyler.

Election 2020: How to watch live election results from Illinois, Indiana and Wisconsin

"Whatever their opinions and beliefs are they want to do always expressed and they're doing it," said Chicago Board of Elections Chairwoman Marisel Hernandez.

No matter what your vote is for, there are still plenty of ways to be counted.

The United Center has same-day registration and a drop-off box for mail-in ballots. There are also drop boxes at Guaranteed Rate Field and Wrigley Field. If you have not registered to vote, you can do that on site.
Two forms of ID, including at least one with your current address, are needed.

Voters in suburban DuPage County headed to the polls on Election Day, including a site at the county fairgrounds.

The county's early voter turnout was so overwhelming they have added an additional 18 voting sites for Election Day.

There is concern that the COVID-19 surge could potentially discourage voters from turning out on Election Day, according to ABC7 Political Analyst Laura Washington.

"That could hurt Donald Trump because his voters are expected to be much more likely to vote on Election Day, but they're also folks who are not as concerned about COVID is to Democrats," Washington said.

Even before Election Day, DuPage County was on track to beat voter turnout from the 2016 election, with more than half of county voters casting their ballots days before the election

The number of early voting sites was increased by 50%, and residents turned out to vote in record numbers.

"We are so excited about this, we're not complaining. We want high voter turn out to become the norm," said DuPage County Clerk Jean Kaczmarek.

From the DuPage County fairgrounds in Wheaton to locations in Elmhurst residents saw a new look to in-person voting. There are clear marks to keep people socially distant and face masks on every person inside each location.

"I was pretty nervous but I got it done," said Arias.

But they said they were determined to not waste their first chance to cast their ballots.

"For me it was really important especially because it was my first time voting," said Garcia. "Since I have the right I might as well take advantage of it, plus so we can vote for people who can't vote."

Voters in suburban DuPage County headed to the polls on Election Day, including a site at the county fairgrounds.

Across the county, half of registered voters in DuPage County have cast their ballots- either by mail-in voters or early voting.

As a reminder, if you have not done so, you can drop those early ballots in secure drop boxes at polling locations.