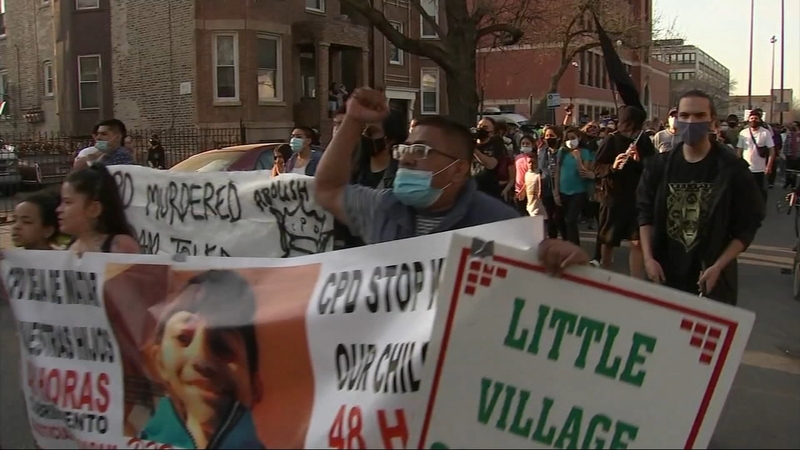 CHICAGO (WLS) -- Mayor Lori Lightfoot is vowing to bring to justice whomever is responsible for putting a gun in the hands of 13-year-old Adam Toledo, who was fatally shot by Chicago police.

"This is a tragedy. The most tragic of circumstances. Let's not make it worse by passing judgment," Supt. Brown said Monday.

He said one of his biggest fears has been "a deadly encounter between one of our officers and a juvenile," amid the recent spike in violence crimes involving Chicago youth.

At around 2:30 a.m. last Monday, Chicago police officers were responding to a ShotSpotter alert of eight shots fired when they came upon Toledo and a 21-year-old man in an alley near 24th and Sawyer in Little Village. They say a foot pursuit ensued and during an "armed confrontation," an officer shot Toledo in the chest.

A vigil to remember Toledo was held in the Little Village neighborhood Monday afternoon.

"We are here today to stand in solidarity with Adam's family and our community, to grieve and pray together," said Jacqueline Herrera, Violence Prevention Director at Enlace Chicago. "He had a big imagination and curiosity since he was a baby. Adam was 13 years old,. He still had a full life ahead of him."

Toledo wanted to be a police officer, but Lightfoot said Monday that the teen had fallen victim to the allure of gangs.

"I had the privilege of speaking briefly with Ms. Toledo," Lightfoot said. "I called to offer her my condolences, and my help for whatever she needs. She was as you might expect overcome with emotion and profoundly grieving."

COPA is now investigating and is arranging for the mother to view the body camera video before publicly releasing it.

The family is asking for peace after gangs reportedly called for shooting at police cars in retaliation.

The mayor has now ordered an immediate review of the police foot pursuit policy. She is also vowing justice.

Police shared a photo of a gun allegedly recovered at the scene.

"Our officers have to make split-second decisions when it comes to the use of deadly force and that is a heavy burden," Chicago Police Supt. David Brown said.

A second suspect, 21-year-old Ruben Roman, is charged in the incident with a misdemeanor for resisting an officer. A source told ABC 7 Chicago Roman is a known gang member.

"We will not tolerate [gangs] using our children pawns and setting them up for a life of misery... here is where we must, must draw the line," Lightfoot said Monday.

The mayor vowed Monday to find who is responsible for giving the young teen a gun.

"I am determined," Lightfoot said. "We will find the person who put this gun in Adam's hand. We will not be deterred by threats from gang members. An adult must be responsible for putting that gun in that child's hand."

An attorney for the Toledo family released a statement that said, in part "...want to correct the hurtful and false mischaracterization of Adam as a lonely child of the street who had no one to turn to. This is simply not true. Adam was a loved and supported 13-year-old boy. He lived with his mother, his 90-year-old grandfather, and two of his siblings. His father was in his life. They all loved him very much... Adam was not alone."

Pastor Matt DeMateo, whose New Life Church works with at-risk kids, stood with his 13-year-old son, who went to school with Toledo. They were also neighbors.

"We lost a son, a neighbor, a student, and there are no winners in this situation," he said.

People in the neighborhood said they invited the police commander to Little Village Tuesday night for a peaceful community conversation.

"Officers must make split-second decision when it comes to the use of force and that its a heavy burden," Brown said.

Toledo's mom said he used to sneak out at night while she was asleep and had filed a missing person's report for her son the Thursday before the shooting after she noticed he was missing. She told ABC7 that Toledo eventually came back on Saturday, but had snuck out again Sunday night.

The boy's family released a statement last week claiming that Toledo's mom wasn't notified of her son's death until two days after the fatal shooting.

Brown addressed this Monday, saying that Toledo had no identification on him at the time of his death and that Roman provided a fake name to police, which resulted in difficulty identifying the boy.

After reviewing missing persons cases, including some who had returned home, investigators found a report with a description they felt resembled Toledo. The teen's mother was then notified and confirmed it was her son, Brown said.

Toledo's mom Elizabeth said he had aspirations of becoming a police officer one day.

"He was so full of life," she said. "They just took it away from him."

The Civilian Office of Police Accountability is expected to release body camera video of the shooting this week after it is viewed by the family.

Last week, the agency released a statement saying, "COPA has determined that certain provisions of state law intended to protect the confidentiality of juvenile records do not prohibit the agency's release of material related to its investigation of a Chicago Police Officer's fatal shooting of 13-year old Adam Toledo. COPA's General Counsel concluded that the Juvenile Court Act does not bar publication of the body worn and third-party video camera footage the agency has obtained to date. COPA will therefore follow established City policy, which requires public posting of material at the earliest point possible but no later than 60 days after the incident. COPA is currently working with the Toledo family and their representative to arrange for a review of the troubling video footage. Again our condolences are with the Toledo family during this challenging time."

The family of Adam Toledo, a teen killed by CPD in Little Village, spoke out during a press conference Friday.

The family is waiting to see that body camera video of the shooting next week before deciding to file any potential lawsuit.

The family of Adam Toledo appreciates the personal and public condolences expressed by Mayor Lori Lightfoot, Chicago Police Superintendent David Brown, Pastor Matt DeMateo of New Life Community Church Little Village, and others who have reached out to them in this time of excruciating grief.

We are concerned by presumptions, implications, and statements made today that are not supported by the facts made public so far regarding what transpired on March 29, 2021. We are unable to refute or respond to these statements until we obtain the evidentiary facts, which so far are known only to the police.

We are working diligently to learn the truth about what happened in the early morning hours of March 29 when Adam's life was so tragically cut short by a police bullet. We have requested expedited meetings with pertinent authorities to obtain evidence and to review the police body camera footage and other available video. To date, we have not received confirmation of a time to view the footage. We are not going to let the anguish and emotion of the moment interfere with our objective to obtain the facts. We will address all public statements about the circumstances of Adam's death once we have the facts before us.

We do, however, want to correct the hurtful and false mischaracterization of Adam as a lonely child of the street who had no one to turn to. This is simply not true. Adam was a loved and supported 13-year-old boy. He lived with his mother, his 90-year-old grandfather, and two of his siblings. His father was in his life. They all loved him very much. The Toledo family is a close-knit family. They look after each other. Adam attended Gary Elementary School where he had the support of his teachers and his classmates. Adam was not alone.
Report a correction or typo
Related topics:
chicagolittle villagepolice involved shootingchicago shootinglori lightfootofficer involved shootinggun violenceofficer involved shootingteen killedteen shotperson killedchicago police department
Copyright © 2021 WLS-TV. All Rights Reserved.
CHICAGO POLICE DEPARTMENT 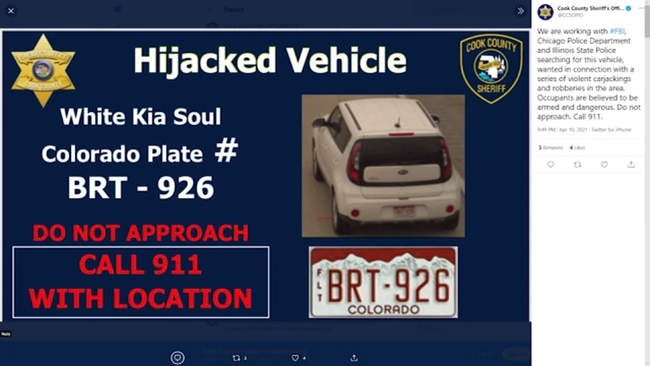