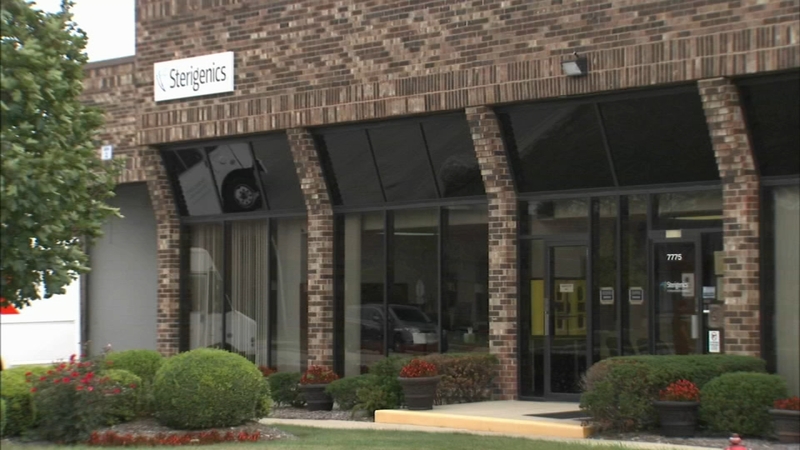 WILLOWBROOK, Ill. (WLS) -- The Willowbrook area community and politicians are outraged over plans to re-open the Sterigenics plant after testing found it was emitting a cancer-causing chemical in the air in a radius around the plant.

The facility has been shut down since February because of concerns about its emissions of ethylene oxide, a carcinogenic chemical. The company, which sterilizes medical equipment, has operated in Willowbrook since 1984.

Sterigenics said Wednesday it has reached a deal with the state of Illinois to resume operations at its southwest suburban facility.

Community members, local municipal mayor and other politicians rallied against the plan outside of the DuCounty Court on Thursday.

A judge decided to wait to rule on whether area villages can join a state lawsuit against Sterigenics.

"The consent order is so full of holes you can drive a truck through it," said State Rep. Deanne Mazzochi.

The agreement would allow the medical sterilization company to reopen and continue to use and emit the cancer causing gas ethylene oxide, but in vastly lower levels.

"What we need is 100 percent capture. We need zero emissions. For god sakes, this is a carcinogen. Ethylene Oxide causes cancer," said Willowbrook Mayor Frank Trilla.

Under the agreement, Sterigenics is not found liable or at fault in any of the State's court cases.

They will need to implement new emissions capture and control equipment and fund 300-thousand dollars in community environmental projects.

"It is patently wrong to let Sterigenics walk out of this courthouse without admitting fault," said State Sen. John Curran.

Chicago-based lawyers are representing more than 1,000 clients allegedly affected by Sterigenics' cancer-causing gas said the company is not to be trusted.

"Being forced to make a correction in what they were doing out there demonstrates their guilt in this regard," said Power Rogers & Smith attorney Todd Smith.

Community organization Stop Sterigenics called on Illinois Attorney General Kwame Raoul to remove himself from the case and for Governor Pritzker to appoint a special prosecutor.

"Enough of this. Represent us," said Lauren Kaeseberg, of Stop Sterigenics. "Get up there in court and fight for us. We're sick of doing the fighting by ourselves."

They also called on Governor Pritzker to use an executive order to ban all emissions of ethylene oxide.

Pritzker's office said he does not have the constitutional power to ban ethylene oxide emissions.

The settlement agreement between Sterigenics and the state still needs to be approved by a judge. That could happen as early as next Wednesday at 1:30 p.m. during a hearing at in DuPage County Court.

A statement from Sterigenics said in part:
"The installation of new emissions controls will firmly establish the Sterigenics Willowbrook facility as having the strictest EO control environment of any facility in the country."