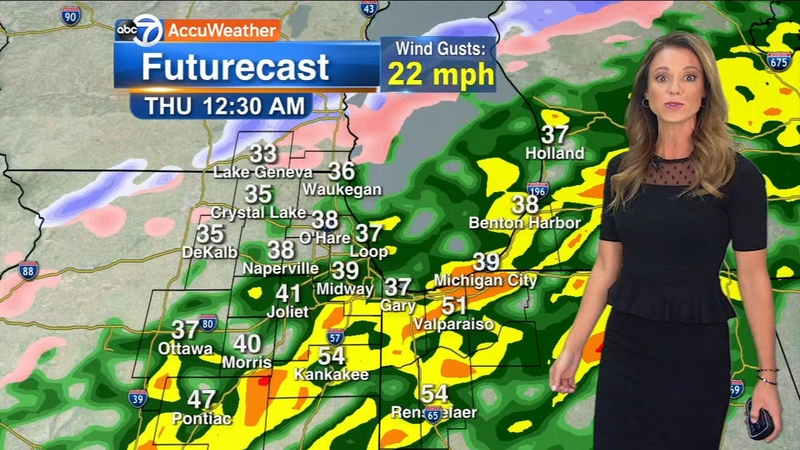 CHICAGO (WLS) -- Wednesday was the warmest day of the year so far as temperatures rose into the 50s, but another winter storm is forecast to slam the Chicago area on Thursday.

The storm will bring heavy rain and potential ice before dropping 4 to 7 inches of snow on parts of the area Thursday. There's even a chance you'll hear some rumbles of thunder.

The National Weather Service has issued a Winter Storm Warning for Chicago, central and southern Cook, Grundy, Kankakee, Kendall, La Salle, Livingston and Will counties in Illinois and Lake and Porter counties in Indiana from 3 a.m. until 9 p.m. Thursday.

A Winter Weather Advisory for northern Cook and DuPage counties will go into effect at 12 a.m. until 9 p.m. Thursday and until 6 p.m. for DeKalb and Kane counties.

Thursday 3 a.m. to 7 a.m. - Period of light freezing rain and sleet will be possible. Light glaze of ice.

Thursday 11am to 9pm - Snow arrives and will be heavy at times with gusty northeast winds.

Wednesday afternoon will be windy and mild before rain arrives in the evening, becoming heavy at times, ABC7 meteorologist Larry Mowry said. Rainfall amounts of .50 inch to 1.50 inches are possible.

Overnight, temperatures will drop to near freezing and the rain will transition over to an icy mix from around 3 a.m. to 10 a.m. Southern parts of the Chicago area could see some significant ice accumulation.

The morning commute will have some icy spots depending on how long the freezing rain and sleet lasts, Mowry said, but there will likely be a break in precipitation during the height of the rush hour.

A winter storm coming in as rain could bring ice and a significant amount of snow as well throughout the day Thursday.

After the break, Mowry said heavy snow will move in around 11 a.m. and will continue through the afternoon and evening.

The most snow is expected to fall south of the city, with snowfall amounts ranging from 4 to 7 inches. In the city and points north, residents can expect closer to 2 to 4 inches, with some 5-inch totals possible.

The Thursday afternoon rush hour will likely be worse than the morning, Mowry said. With snow falling and winds gusting up to 35 mph, drivers should expect snow accumulation on the roads and poor visibility.

Chicago Streets and Sanitation salt trucks were loaded up and ready to go Wednesday evening. Street sweepers are also clearing debris from underneath viaducts ahead of heavy rain that could cause flooding.

"We also ask if you've got a catch basin in front of your house, it's a good time to clean that off before this rain comes," said Cole Stallard, commissioner of Chicago Dept. of Streets and Sanitation.

As that heavy rain turns to ice overnight, IDOT will be laying salt. But the timing will be tricky.

"You don't want to do it in the midst of a heavy, heavy rain, it basically gets washed away," IDOT spokesperson Maria Castaneda said. "But you want to get it down there before it really starts icing over. Especially in the beginning of this, even though the roads look clear, they could be very slick."

That ice could also impact rail travel, especially trains that rely on overhead wires, like the Metra Electric and South Shore lines. Metra will be running those trains overnight.

"Running up and down the lines to just make sure that there is no ice accumulating on those overhead wires," Metra spokesperson Michael Gillis said.

With ice and heavy snow potentially snapping tree branches and knocking out power, ComEd is beefing up staffing.

"We're also reaching out to contractors and other resources to make sure that we've got enough people on the system, so that if we start to see some impact from this weather, we're ready to get on it right away," ComEd spokesperson John Schoen said.

Waves on Lake Michigan will build through the day Thursday, so areas along the lakeshore may experience some flooding as well.

A Lakeshore Flood Advisory is in effect from 6 a.m. Thursday to midnight.

Stay tuned to ABC7 Eyewitness News and ABC7Chicago.com for the latest updates on the winter storm.