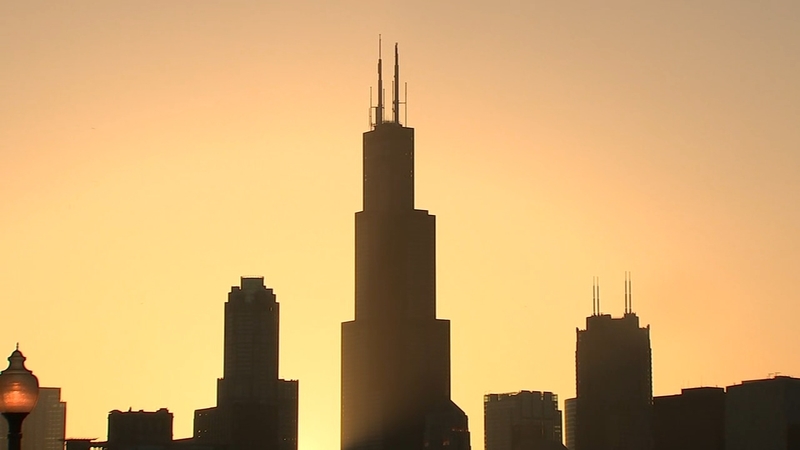 "My apartment was 92-point something. I've got a fan, but it doesn't do much good," said Dorothy Radcliffe, a19th floor resident. "Sometimes, tenants open their door at night to get the air out of the hallway."

While the city works on restoring the AC ,the housing authority offered up a bus for residents to get cool.

"They had people come up with some kind of temperature thing walking around... 'wow you're at 91.5,'" said Gregory Ellis, a 13th floor resident.

While the city works on restoring the AC the housing authority offered up a bus for residents to get cool.

ComEd said more than 13,000 remained without power Tuesday afternoon, down from a height of 125,000 after Monday night's storm left a trail of damage.

ComEd said workers are making the rounds, mostly in the north and northwest suburbs and the city, trying to restore electricity and order before sweltering temperatures make the task unbearable. Still, Tuesday night was rough for Broadview residents.

"It's pretty severe. A lot of power lines are down. Polls over here, utility poles over here were set on fire they they burned," said Bruno Carter, a Broadview resident.

From Brookfield to Broadview, neighborhood streets were lined with downed branches.

A couple ABC7 spoke with in Broadview said that they stayed at their daughter's home last night because it was too unbearable to stay at their own home and they plan on doing that again Tuesday and Wednesday nights if they have to.

The heat even caused the pavement to buckle in west suburban Elmhurst Tuesday night. IDOT crews were making repairs on eastbound Roosevelt Road between Salt Creek and York road. IDOT Spokesperson Guy Tridgell believes it is the only incident so far in the Chicago area.

As the warm front that set off the storm lifts north, temperatures will soar well into the 90s in the Chicago area on both Tuesday and Wednesday. The Chicago Office of Emergency Management and Communications gave tips to stay safe Tuesday morning, ahead of the heat wave.

"Keep electric lights off or turned down, minimize use of your oven or stove, wear loose, light cotton clothing, take cool baths and showers. Don't leave anyone, including pets, in a parked car, even for a few minutes," said Rich Guidice, executive director with the Office of Emergency Management and Communications.

The city is reminding people to take precautions to avoid extreme heat emergencies.

A Heat Advisory has been issued beginning Tuesday at noon until 8 p.m. Wednesday, according to the Office of Emergency Management and Communications. The advisory includes north central and northeastern Illinois, as well as portions of northwest Indiana.

An Excessive Heat Warning has been issued for central Cook, DeKalb, DuPage, Kane, northern Cook, southern Cook, eastern Will, Grundy, Kankakee, Kendall, LaSalle, northern Will and Southern Will counties in Illinois and Lake, Porter and more counties in northwest Indiana until 8 p.m. Wednesday.

Doctors at Rush Medical Center cautioned people to be aware of their bodies and seek immediate medical attention if they start to get tired or even worse, experience a heat stroke.

"The worst case scenario is actually having seizures and dying," said Rush Medical Center Physician Vinoo Dissanayake. "The fact that we actually know that cramps begin it all, and you can have nausea, vomiting, maybe light-headedness, dizziness, headaches... It could really be warning signs to you that you need to get to a cold place."

Public pools will be closed, however, for another 10 days, while the Chicago Park District works to hire more lifeguards.

Many got their walks, runs or bike rides in early Tuesday ahead of the high temperatures.

"Enjoy the summer while it lasts, so enjoy the heat," another person said.

Even George, the dog, was getting his steps in.

"Exactly, so he'll get some exercise in before it gets too hot. So yeah!" Reed said.

Crowds of parents and kids also spent some time escaping the heat at Splash Country Aquatic Center in Aurora.

"The pool is feeling amazing! We've been out here since 9 a.m.," said Jannet Martinez, a park-goer.

With a lifeguard shortage in the area, the facility has been working hard to keep staffing up. It takes more than 30 lifeguards to keep the place open.

And while these folks are keeping cautious about the heat, they're also having fun while staying cool.

"I have a baseball game, today. I'm going to be dying! So, I mean, this is heaven for me," said Quinn Humble, a park-goer. "Better than being out in the sun in 98 degree weather in full uniform, in full gear."

An while humans can vocalize their discomfort, pets cannot. Veterinarians have been warning dog owners to watch for cues.

"If it's too hot outside for you, it's probably too hot for your pet," said Dr. Emma Pearson of MedVet Chicago. "They should watch for excessive panting, especially if you get them back in the cool indoors, and not able to settle down, panting heavily, pacing... Heat stroke can have really serious consequences."

The Dog Beach at Montrose Harbor has been packed with pups still acclimating to the season, and more than happy to do so with a little catch and release in the lake.

"He knows he's on his way and as soon as we get out of the car, he makes a beeline for the water," said dog owner Harry Mitrovich.

The Illinois Department of Transportation launched around-the-clock Hot Weather Patrols to more quickly locate and assist customers stranded along its roads during the dangerously high temperatures and humidity. The 24-hour patrols search for drivers stranded in disabled vehicles and respond to calls that come in to *999 motorist assistance, Illinois Tollway dispatch or Illinois State Police District 15.