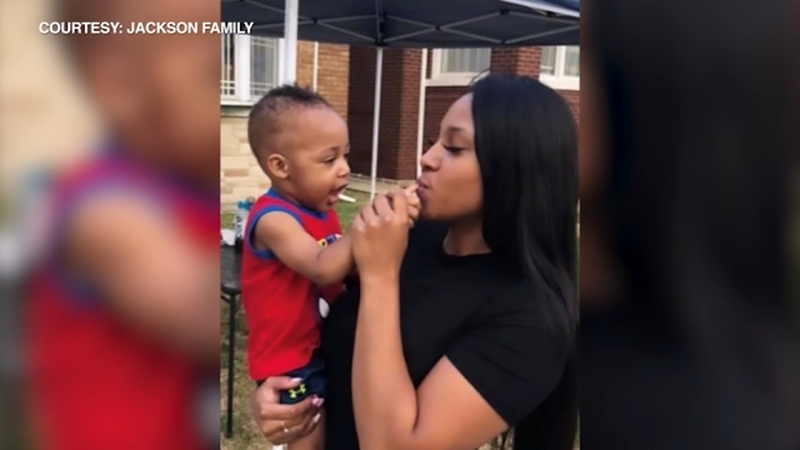 CHICAGO (WLS) -- A south suburban Midlothian family honored a 27-year-old mother who was shot and later died after a shooting on the Dan Ryan Expressway last week.

The family of 27-year-old Darren Jackson held a cluster of balloons tightly together as the victim's mother tried to hold it together during a memorial Sunday.

Once the balloons were released, pops of pink weightlessly colored the skies as gravity brought down many tears and heavy hearts.

"It's is unbelievable. It is indescribable, it's unbearable," Jackson's mother Shauncey Payton said. "There's nothing normal about this. This is tragic. This is something that no mother should have to experience and I wouldn't wish this on any other mother or any other person."

Jackson's family said the mother and esthetician passed away Saturday after a days-long fight for her life after being shot on the Dan Ryan Expressway last week.

Payton said her daughter was a true woman of beauty inside and out, as well as a doting mother to her 4-year-old son.

"She was such a brave woman. She really was. She was there for each and every one of us," Payton said. "We are still in disbelief that we're not going to be able to experience her spirit any longer here in this lifetime."

The night of the shooting, Jackson's family said she was driving home after picking up groceries in Oak Forest. However, she never made it back alive.

Jackson's family said before the 27-year-old mother was shot, she called for help, claiming she was being followed.

Jackson's family said investigators told them they got her call, but by the time they were able to get to her, it was too late.

ISP said early in the investigation that the shots appeared to come from someone inside another vehicle in the area.

A week later, her family is broken and begging for answers.

"If they have these high-definition cameras on the Dan Ryan Expressway and they they're newly installed, how come they have not been able to actually see who did this," Payton said.

Illinois State Police said the case is still under investigation. Both ISP and Jackson's family are pleading with the public for any information that could help solve this case, and bring closure and justice to the family.

Police asked anyone who witnessed the shooting or has any knowledge of the incident to contact 847-294-4400 or email at ISP.CrimeTips@Illinois.gov. Witnesses can remain anonymous.