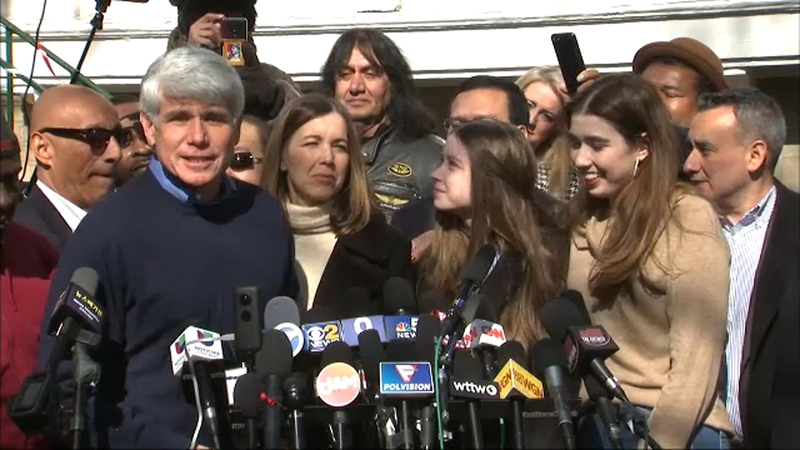 CHICAGO (WLS) -- It's been more than seven years since former Illinois Gov. Rod Blagojevich was last photographed with his family at home.

The ex-governor stood alongside his wife, former Illinois First Lady Patti Blagojevich, and their two daughters outside their Ravenswood Manor home during a press conference Wednesday, one day after his prison sentence was commuted.

He thanked President Donald Trump for giving his daughters "their father back."

"Annie, our younger daughter, was eight years old when I left. She was about this high. Now she's 16 and now she has her driver's license, and she's doing good in school. She plays the piano, and we're very proud of her too," Blagojevich said during a press conference outside their Ravenswood Manor home on Wednesday.

He later remarked, "My baby's growing up so fast."

Patti Blagojevich championed her husband's release and made frequent pleas on television, hoping President Trump would hear her cries for clemency.

The push began when the convicted governor lost his final appeal to the U.S. Supreme Court in April 2018.

In June of 2018, the possibility of the former governor being released gained traction when President Trump mentioned that he was considering it.

Trump said Tuesday that he saw Patti Blagojevich on television lobbying for her husband's release.

"We know that President Trump is a kind man and he's compassionate, he's always been kind to my family," she said at the time.

Patti has maintained that her husband deserves to be home with their two girls. Their oldest is now in her 20s and their youngest 16.

On Tuesday, Patti's sister, former Chicago alderman Deb Mell, spoke and said her sister was "elated" at the news but would not be addressing the media for quite some time.