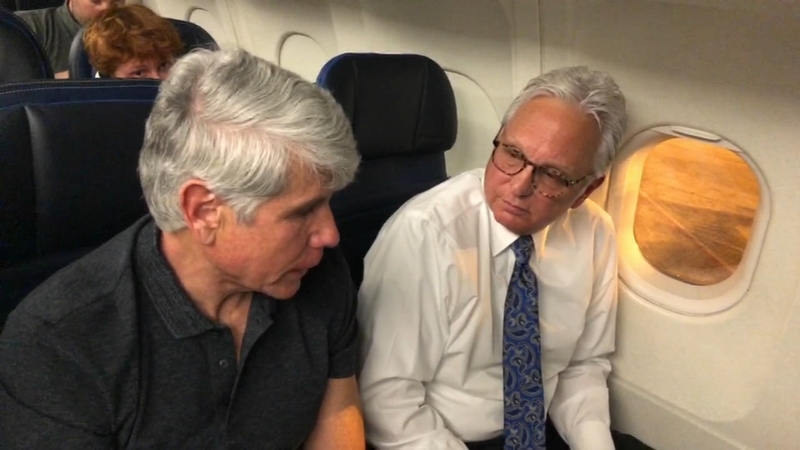 CHICAGO (WLS) -- In prison there is no bar cart.

So when a flight attendant wheeled the cocktails and snack boxes up the aisle to the row where Rod Blagojevich and I were seated Tuesday night, what was his first indulgence?

No whiskey or white wine and not even a beer.

After being locked up for eight years, Blagojevich had straight cran-apple juice, and not even a double.

"Can you imagine if I had a drink after eight years?" Illinois' ex-governor whispered to me, his face inches from mine in the close confines of row 7, the coach bulkhead on United Airlines night flight from Denver to O'Hare.

"If I had a drink then you would have a real story to tell," Blagojevich said.

As it was, stories abounded during the couple-hour flight. ABC7 reporter in 7a, Blagojevich in 7b and his trusty new clemency expediter Mark Vargas in 7c.

After being cut loose Tuesday morning by President Trump's commutation order, Blagojevich was almost prevented from getting on the flight.

He recounted how his prison ID card, inmate # 40892-424, had been stolen right after it became known he was getting out, probably by an inmate who wanted to "sell it for $10."

Problem was, with a long-expired Illinois driver's license, that prison ID was what he planned to show TSA at the airport to get through security for his flight home.

Fortunately for him, Vargas-a politically savvy and highly- connected Chicago consultant who has been working quietly behind scenes on the commutation-picked up Blagojevich's old wallet from his house before coming to Colorado.

A suspicious but sympathetic TSA officer at Denver International Airport went to a supervisor and they waived the former governor through on his old license.

In prison there is no bar cart.

After a TV camera scrum in the Denver airport, Blagojevich, 63, and Vargas were allowed to board first-if for no other reason than to stop the news fracas in the gate area.

When the I-Team boarded, Mr. Blagojevich realized that I was his row-mate and photographer Jose Sanchez was ticketed right behind him. "Things have come full circle," I said to the defrocked governor and he agreed, remembering-vividly I imagine-that we had engineered a similar seating configuration when he first reported to prison on March 15, 2012.

Of course, obtaining a few hours of undivided and close-up conversation with the newsmaker-of-the-day (not to mention one who had just been sprung from prison by President Trump) is what reporters do.

The first revelation from Blagojevich actually involved his shoes. He was almost giddy to be wearing decent running shoes, after enduring prison-issued "cheaply made" shoes as he called them during his daily one-mile runs on the prison track.

The comfortable shoes, although conspicuously still on jailhouse white socks, seemed to be a symbol of Blagojevich's newfound freedom and he would unconsciously rub his hands over them frequently on the flight-seemingly for verification that they were real and he was headed home.

Passengers on the flight were mostly happy to see him and he them. Many offered observations that he had been locked up too long and deserved to be out. Ever-the-candidate-for-something, Mr. Blagojevich played along and appeared to enjoy it.

He told me that in the depths of his years in prison, he couldn't conceive of those public moments ever happening again.

Early in the flight there was one uncomfortable and raw exchange with the passenger right across the aisle. She told Blagojevich in an angry voice that his corrupt conduct was "offensive and outrageous" and that the Illinois Democrat had become "a surrogate of Trump." Over the aisle and in a bitter tone, the woman told Blagojevich that he should "sneak away and don't make it worse."

Perhaps stunned by the tirade, Blagojevich said nothing-even when it ended with her calling him "disgusting."

Prison had made him more tolerant of being verbally abused he said during the flight, describing how guards would try to get the best of him by loudly criticizing him for unimportant things. He said that "when he has some power again" maybe he will go back and take them on, but I believe he was joking.

Blagojevich talked in a near stream-of-consciousness and answered my questions the entire flight. There were no TV cameras going for most of it and it was dark anyway. I listened and took notes.

His freedom had almost come a few months earlier, he explained, with Vargas actually at the Colorado prison to pick him up and that he was "25 feet away" from being released by a presidential order. But that was November, and an impending impeachment trial apparently short-circuited President Trump's commutation at the last moment.

He would have to wait another Christmas and start of a new year to get out.

Although the entire clemency process seemed haphazard for almost two years, with the president's give and take rife with false starts and false hopes, both Blagojevich and Vargas told me it was actually well-honed and a bi-partisan behind-the-scenes deal that developed methodically. Vargas said the end game even included a phone call he had last week with Trump adviser Jared Kushner, the president's son-in-law.

And there were phone calls made and exchanged as soon as Blagojevich got out of prison Tuesday afternoon. To his wife and daughters, of course, but also to the Rev. Jesse Jackson who had applied public pressure for clemency. And a call came in to Blagojevich from Bernie Kerik, the former New York City police commissioner who was outright pardoned by the president on Tuesday. Kerik did three years for tax fraud and lying to officials.

As of the flight home, Blagojevich said he had not spoken with the president and seemed cagey about whether that would happen. He was however praiseworthy for the Republican who had just given him early freedom from a 14 year prison sentence, but did not commit to making appearances with him or for him.

There would be no political quid pro quo for his release, Blagojevich said, invoking the oft-repeated lingo from Trump's impeachment.

At one point in the flight, while on a rant about federal prosecutors and legal system that put him away, he stopped himself and said all of it was "in the past" and that he had to move on.

Items covered on the ride home:

-New Chicago Mayor Lori Lightfoot: said he never met her but said as a former federal prosecutor she is "one of them" part of what he believes is a corrupt justice system.

-His father-in-law Dick Mell, former Chicago alderman: they had a public falling out before prison and Blagojevich said he hasn't spoken to him since saying goodbye eight years ago.

-His brother Robert Blagojevich, who was prosecuted as campaign finance chairman but there was a hung jury: They too had a falling out. When told that we had interviewed Robert regarding Rod's release, Rod said and asked nothing.

-"Effin' golden": Blagojevich's famous recorded line about the Obama Senate seat he tried to sell. After "effin' golden," what happened next, he asked? Nothing, he answered himself. "They never played the rest of the tapes that showed that."

-"I need a job": Scrubbing pans in the prison kitchen for $4 an hour won't cut it, he said.

-No luggage checked: he left prison as he came in. Except for 75 books that he says he bought and read while at the Greybar Inn. Mostly history and Shakespeare. They were boxed up and are being shipped home.

-No Cubs: he couldn't bring himself to watch them even though they were on prison TV's. Except for the World Series final game.

-No Christmas music: never listened to it, he said. Made him too sad.

-"Sweet Home Chicago"-when he saw the skyline shrouded in fog on Tuesday just before midnight, he quietly sang a line of the song.

As the plane pulled up to C-30, the further United gate from airport freedom, there would be one more delay. After eight years the jet bridge got stuck and couldn't be maneuvered to the plane. It would be another, agonizing ten minutes to put his new shoes on Chicago soil.

Blagojevich finally walked off the flight and was immediately stopped by an airline employee for a photo. As in the old days when he was one of the state's most popular public officials, he stopped and smiled for the camera.

"Are you running for something?" I asked him.

Blagojevich took the bait, and said he remembered the same, infamous question asked by CBS' Dan Rather of President Richard Nixon.

"Are you running for something?"

He only smiled and continued on through the terminal.