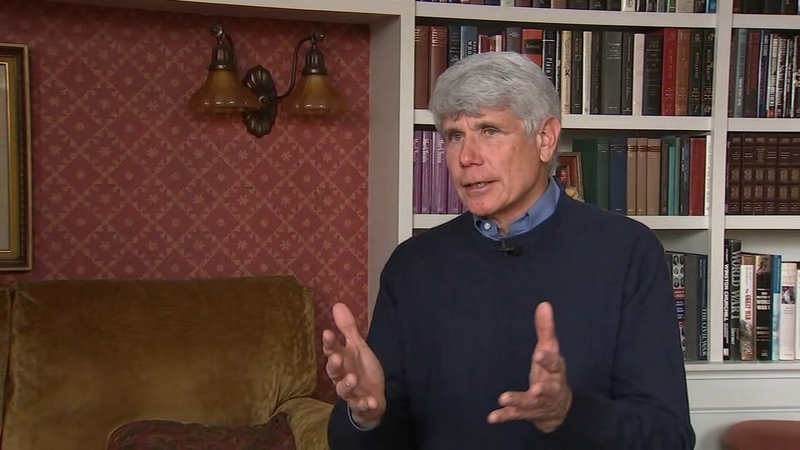 CHICAGO (WLS) -- After more than seven years, ex-Governor Rod Blagojevich is back home with his family after President Donald Trump commuted his prison sentence Tuesday.

Blagojevich spoke from his library, and just as the man who commuted his sentence said his notorious Ukraine phone call was perfect, so said Blagojevich about himself. He said his actions were above the board, and that he's been a political prisoner for eight years.

He said he saw his treatment as similar to the president's.

"The very same people who did it to me, many of them have been trying to do to President Trump, they turned things, they're routine and legal, and they suddenly say they're illegal," Blagojevich said.

Blagojevich arrived at his Ravenswood Manor home just after midnight Wednesday morning amid a crush of reporters and cameras.

After more than seven years, ex-Governor Rod Blagojevich is back home with his family after President Donald Trump commuted his prison sentence Tuesday.

At a press conference Wednesday morning, Blagojevich emerged from his home with his wife and children at his side. Blagojevich had to wipe blood from his face after cutting himself shaving, saying it had been awhile since he shaved with a real razor.

"It's been a long, long journey. I'm bruised, I'm battered and I'm bloody. It's been a long time since I've shaved with a normal razor," he said. "It takes a little practice."

He then went on to thank the president for the commutation.

"I've got 10,000 reasons to be thankful to President Trump, I am obviously to be home and to have my freedom back, to be able to hold my wife's hand, but most of all I am thankful to you Mr. President for giving my daughters their father back," Blagojevich said.

Blagojevich said Trump, a Republican president, "didn't have to do it" for the former Democratic governor, and he then labeled himself as a "Trumpocrat."

"If I have the ability to vote, I'm going to vote for him," he said.

He then addressed Illinois voters.

"To the people of Illinois who twice elected me governor, I didn't let you down," Blagojevich said. "I would have let you down if I gave into things. But resistance to tolerance is obedience to God."

Blagojevich expressed no contrition and offered no apologies for the crimes that landed him in prison.

"From beginning to end, this was persecution masquerading as prosecution," he said instead.

As the press conference was wrapping up, President Donald Trump tweeted, "Rod Blagojevich did not sell the Senate seat. He served 8 years in prison, with many remaining. He paid a big price. Another Comey and gang deal!"

Rod Blagojevich did not sell the Senate seat. He served 8 years in prison, with many remaining. He paid a big price. Another Comey and gang deal! Thank you to @LisaMarieBoothe who really “gets” what’s going on! @FoxNews

Blagojevich spent most of the day at home with family, then left his house shortly before 5 p.m. It was not immediately clear where he was going.

Rod Blagojevich speaks at the Denver Airport following his release from prison, hours after his sentence was commuted by President Trump.

Hours after Trump commuted his sentence, Blagojevich was released from prison in Colorado and caught a flight home to Chicago out of Denver. He spoke to reporters as he prepared to board the plane, saying he didn't have advanced warning of Trump's decision; instead, he found out through the news like everyone else.

"My first thought was, 'I wonder if I'll have time to get a run in,' believe it or not," Blagojevich said. "Because you get programmed, you have routines and I found that it helps through this time when you discipline yourself every day and you have something to work for, it helps you do it. And so I had a run planned and I think, I wonder if I'll get that in before I go. And there was this helicopter over the prison so I thought well, maybe I won't run, so I went and did push-ups."

"I followed the law every step of the way," he added Tuesday night. "I've said that all along, and that's absolutely the case, and they're the ones who did wrong and I think eventually the truth will win out, and the Bible teaches that."

ABC7 Investigative Reporter Chuck Goudie was on the same flight from Denver to Chicago and was seated right next to the former governor.

On his journey back to Chicago, the former governor had been very talkative, but when he got home he didn't speak and his wife Patti was not seen.

ABC7 caught up with Blagojevich after his plane landed at O'Hare. Blagojevich said the first thing he is going to do when he gets home is "kiss my wife and my daughter."

Rod Blagojevich was welcome home by supporters in Ravenswood Wednesday.

Some neighbors who have endured the media scrutiny for years said they are looking forward to the convicted felon's return.

"Enough is enough, this was too long," one neighbor said.

"He made some terrible mistakes, but he served long enough," another neighbor added.

Meanwhile, many of Blagojevich's supporters showed up for the press conference Wednesday.

Blagojevich had to wipe blood from his face after cutting himself shaving, saying it had been awhile since he shaved with a real razor.

Thurgood Papadapoulos described the press conference as "a big spectacle."

While many in the crowd took turns signing a welcome banner that now hangs from his porch, not everyone supports the former governor.

On Wednesday, local residents' opinions ran the gamut, just as they did back then.

Ray Kelly, a supporter, said, "I don't think he should have went. A lot of these politicians did worse than he did, you know, and they're still walking around."

"When he was governor, he always said it like it is," said Alex Giokaris. "What he did was wrong, but so was eight years."